Due to my inability to enter many WAMC races over winter because of junior football coaching commitments, I decided to take part in today's Lake Gwelup Fun Run, an annual event run by the Lake Gwelup Primary School P & C which I saw mentioned in the paper. It gets pretty good size field (650 last year) and includes a 6.4km and a 3.2km race. I would normally do some speedwork on a Monday so it fitted in well to do this race instead, as well as satisfy some of my more competitive urges.

It's very early days in my training post Boston, so I didn't have huge expectations of running super quick but hoped to be able to get up out of the tempo pace groove that I got myself into when I ran Matilda Bay earlier in the year when I was similarly unprepared.

It was a great community event, very well supported by the local community and local businesses. Bob and Tiffany from the Biggest Loser tv show were the special guests and there were heaps of stalls, bouncy castles, lucky dips etc to keep kids occupied and parents parting with cash. No wonder they made over $11,000 last year, I bet they beat that this year.

The start was lightly delayed which was bit annoying as I had already warmed up before the delay was announced. Saw Epi at the start and had a bit of a chat. Unfortunately he has suffered another injury (as described on his blog) so wasn't sure how he was going to go.

It was a very congested start with lots of kids at the front of the field and a few teenage boys who went out like bats out of hell only to die after about 300m. The 3.2km and the 6.4km were run together, with the 6.4km consisting of 2 laps of Lake Gwelup. It was a bit confusing/disconcerting not knowing which of the runners ahead of me were 3.2km runners and which were going to continue on for the 2nd lap. 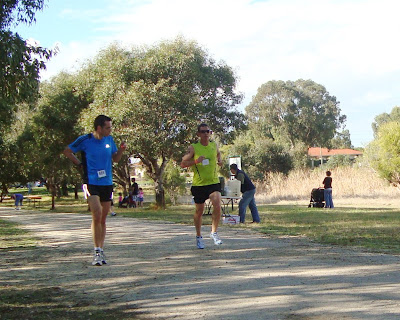 Rox and the kids had come out to watch and as I ran past them, Rox told me that I was 2nd which was a nice surprise as I couldn't see any runners around the bends at that point so didn't know who had finished and who had continued.

I always find 2 lap races a bit difficult psychologically (don't think I am alone there) and this was no different, especially as I was running on my own. I managed to catch a glimpse of the runner behind me (about 50-60 metres back) about 800m into the 2nd lap but didn't see the runner in first place until we got half way around the lap.

By now we had caught up with all the walkers who were doing the 3.2km walk which necessitated running on the side of the path and around all the walkers, prams and kids. It was pretty hard slog for the last 2kms but I think the guy in 3rd was similarly struggling as when I snuck another glimpse behind me I couldn't see him (although it was hard with all the walkers etc).

Maintained my 2nd placing and crossed the line in about 23.28 (by my watch - no clear finish line, just a chute) and was around a minute behind the winner. He ran really strongly and according to Rox would have won the 3.2km if he had finished then, so he had set a good pace out in front which he pretty much maintained.

There was an extremely long delay until the presentations and the weather warmed up considerably as the clouds cleared.

All in all though, a pretty good hit out. Very pleased with the average 3.40min/km pace given no real race specific preparation and of course it is nice to get a place in any race.

I'll do my regular mid week medium long run tomorrow and don't expect there to be any residual effects from this run after a good night's sleep tonight.
Posted by Biscuitman

Congrats and well done on 2nd. Seems as though you've barely missed a beat since returning from Boston.

Running behind you for 3k, you're certainly running very smoothly at pace

thanks guys - certainly feeling good at the moment. Everything seems to going well so I can only hope it continues.

Good to ssee you this morning. What do you have in your biscuit-barrell of running this week. i am keen for anything if you fancy some to share a run with.

or via my blog