Ran the Bridges run this morning. Bit cold at the start until the sun came up from behind the city with a gusty easterly wind which did not suggest that it was going to be a day for running super fast.

Wanted to run under 38 minutes so my plan was to run 19 minutes for first 5km and then negative split with the easterly as a tail wind for the last 2.5km. Went out too hard, even though I felt like I was running a controlled pace but maybe that was the tailwind at the start although it wasn't noticeable. Got to 5km in 18:15 and was worried that I had gone out too hard but didn't feel like I was going to die. Sugar had just gone past me at that stage and I could see Simon up in the distance.

Pushed hard and really tried to maintain some focus and intensity through the 5-8km stage which was where I lost it at Matilda Bay. Unfortunately, this was also where the headwind was the strongest today. Rox and the kids came down to cheer for me at the bottom of Hurlingham Road which was a nice boost at exactly the right time.

Managed to run hard across the Causeway and then over the last km but couldn't catch the two runners in front of me who ran on really strongly. Sugar was about 80m in front of me.

Finished in about 37.20 which is a big PB for me (previously 38.58). Sugar ran 37 flat and Sas ran 39.54 which was PB for her and got her 3rd overall and first in her age group. Our team "Going to Boston" was the first open team and we each got a medal and an Asics towel and bag.

My splits were as follows:

Very pleased with how I went today and especially with racking up another PB. Saw Simon briefly at the finish, from memory I think he said he ran 36.15 or 36.20 which should have got him up in the top 20. Unfortunately I was too buggered to say much at that stage.

Long run tomorrow around 25km but wll feel very comfortable running an easy pace after getting today's hard effort under my belt.

Rox took a photo as I ran towards them. You will note that I haven't made any reference to my attempt to latch onto a group and run with other people. The photo indicates how successful I was ... 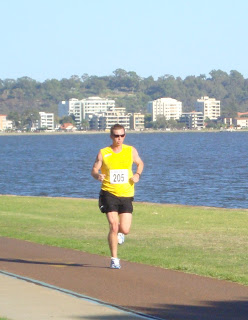 You're going to own Boston

Agree with Epi, things are looking great for you for Boston.