Biscuitboy Runs (and swims and cycles) 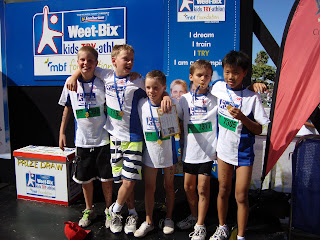 Yesterday Ben (on the left) participated in the Weetbix Tryathlon down on the Esplanade. He had a great time as did all his mates who were in it as well. Bit of a long morning with a long wait after checking in and racking his bike (at around 7.30am) until his event at around 10.15am and then another wait before we could collect his bike etc. Eventually got away around midday. It was worth it though to see all the kids having such fun being active. The event was really well run and my only suggestion would be to have a marshall and perhaps first aid people at the turnaround points on the cycle leg where we saw one crash and a few near misses.
The water in river was a bit shallow but there isn't much the organisers can do about that. Some kids actually ran through the water but Ben swam as he didn't like the squelchy feeling between his toes ...
He finished the run leg really strongly but most importantly really enjoyed himself and got a great sense of satisfaction from completing it.
Yesterday also re-affirmed two things for me - I hate running in the afternoon and don't like daylight saving. I waited until 5pm for heading out for an easy recovery run. As I found later out watching the weather report, the temperature at 5pm had dropped .2 of a degree from the 32.8 maximum at 4pm. If you are going to get a run in before dinner (and if you have dinner at 6pm because you have kids), it is still in the heat of the day. Yesterday was hot and windy. Sensibly not many runners out although I did see my sister in law - she must be as mad as me. Even though I hadn't eaten for 2 hours prior (some dried fruit and nuts), I still found it repeating on me and nearly had a chuck at one point. As a result, not a very enjoyable run. 8.48km in 44 minutes.
Completely different story this morning. Up at 5.45am and out the door at 6am for a slighty truncated long run. Couldn't fit in the full 32km as needed to be back in time for Rox to take Ben to the orthodontist. I had genuinely forgotton how nice and cool and pleasant it is running before sunrise. Ran 28.89km in 2 hours 24 minutes so 4.59 per km including one toilet break. Had a Sanitarium Up and Go Energise beforehand and only took one gel after about 45 minutes. Had another with me but never felt the need for it. Ran very easy and recovered brilliantly afterwards.
Rest day tomorrow after running the past 7 days without a break. Looking forward to Wednesday's run where I am running with another Simon who logs a lot of kms on the Nike+ system. Running down to meet him at Burswood before we do the long bridges run. First time I have been out on a training run with someone for ages and will be good to have a chat as we go around.
Posted by Biscuitman