Forgot to congratulate Sugar (3rd in 10km) and Sandgroper (2nd in 5km) on their runs at Rottnest.  The clouds had cleared by the time their race started and with the humidity and the wind, it made for pretty tough going but they were both flying at the end - really strong performances.

Heaps of kids ran, particularly in the 5km and it was fantastic to see them putting in the trademark sprint at the finish.  Absolutely flat out - I can almost remember when I did that ...

Should also menton that we had a couple of great meals after the marathon was over and done with.  On the Sunday evening, we had dinner at Aristos on the Waterfront.  Great view and great food.  Rox and I had the special - Snapper and prawns with a creamy garlic sauce.  The kids meals, particularly Sammie's calimari were great value.  Real calimari, not those chewy squid rings either.  Definitely recommend it.

Monday we had lunch at the pub.  I had a great steak sandwich which hardly touched the sides.

Looking forward to our holiday on Rotto in January and some relaxed early morning running.


Off to the doctor about my knee on Friday.  I'm half hoping (actually more than half hoping) for another cortisone shot so I can start some easy running next week.

Sugar took some photos at Rottnest as did Rox (I've been told the baggy shorts need to go ... )

At the start with Nick and Ben 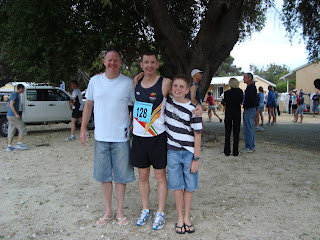 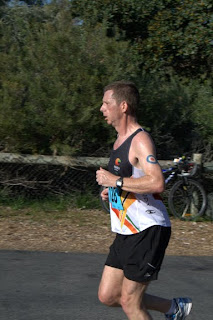 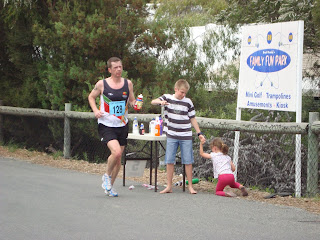 After the finish with ice 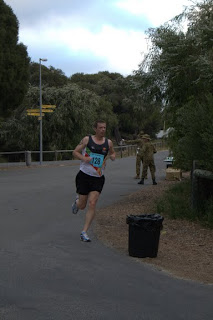 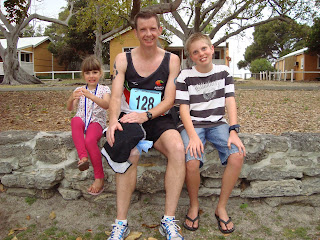 Awww love the recap and pics! So cute!!!