It has been a few weeks since I have been able to update due to our Rottnest holiday and then some unexpected/unwelcome internet outages when we got back.

Week 10's mileage was an estimated 98.9km. I actually missed a day this week when I came down crook the night before we were due to leave for Rottnest. Bit of gastro and nausea left me feeling very average in the morning and with packing and a ferry trip ahead of us as well, I reluctantly decided to break a nearly 100 day streak (pretty much since we had got back from Bali).

Missed what was supposed to be 19km with 12km tempo on that but not overly concerned.

Rottnest was very relaxing apart from Rox's bike getting stolen from the jetty when we arrived. It turned out though that it wasn't actually "stolen" but that some stupid old woman had taken it from the jetty thinking that it was a hire bike. In case anyone, thinks I am being harsh calling her stupid, I think it is pretty hard to mistake a purple/pink Malvern Star Pathfinder for a red/white hire bike but maybe it's just me ...

Got lots of good running in on Rottnest although my long run was not as long as I intended. I was very annoyed as I missed a turn which cut the run shorter. I started to head out on another 7.7km loop to make up the distance and time but spat it after about 500m and walked home. Although it was still approx 30km in 2:15, I’ll need to get a 2:45-3:00 long run in somewhere before the taper starts to make up for this.

I did a few runs of an hour and just over rather than proper medium long runs. It was very windy the week we were there and combined with the hills and running on my own, I decided to keep things at a level where they were still enjoyable.

Probably the best run/workout I had while I was there was a hill repeat session I did at Oliver Hill. Oliver Hill is in the middle of Rottnest Island and where the gun battery that was built during WWII is located. I ran there as warm up (16 mins) then 6 x up the Hill with a jog back then walk recovery of total 2 min. Times for the hill were:
1:17
1:13
1:14
1:12
1:10
1:07

17 min cool down back to our accommodation at Geordie Bay. This was a good session. I haven’t done any speedwork for a while so this was a good reintroduction.

I took another day off on the day we returned from Rottnest (Friday). Packing and then ferry in the morning. Unpacking, washing and shopping in the afternoon. I decided also that it was probably not a bad idea to have a day off with the 32km race on Sunday. Although I hadn't done overdone the running on Rottnest, what I had done, combined with a fair bit of hilly cycling, some of it pulling Sammie on the trailgator, had left my legs feeling a bit fatigued.

Planned to run this at 4min/km pace and achieved it exactly (2:08:28)though the race didn’t go exactly as I envisaged.

My stopwatch crapped itself as I was getting ready so I was reduced to using my Polar FS1 HR monitor which only has time elapsed and which is only hours and minutes after 59:59/1hour.

First km was at 3:55 as was the 2nd (from memory). Around this time I was passed by Kev Matthews and Dave Kennedy so made the decision to stick with them. Kev was saying that his plan was for 4:05/km but they were going at around 3:50-3:55 but I figured it was much better to have people to run with than run on my own.

After about 7km, Dave pushed on and Kev and I were running together with Brad Hart and another guy. We were maintaining around 3:55/km pace fairly comfortably and having a bit of a chat too which was reassuring that we weren’t going to hard. At around 12km we passed the 25km marker for the way back and I said to Kev that if we are still going at this pace when we get back to here we will be doing alright but it was in hope rather than confidence.

The pace was pretty constant and moderately hard ie not as hard as tempo pace. We were passed by Nathan Doig and Cody Angell near Matilda Bay. They had started off at 4min/km and cranked it up from there and although we ran with them for a couple of hundred metres, they had gapped us pretty well by the time we hit the turnaround.

From the turnaround, I didn’t want to let the pace lag at all so ran to the front and pushed on. Brad and Kev stuck with me although there was a short period along Mounts Bay Road where Kev dropped off by about 20m and I thought he might be gone.

As we got closer to the Brewery, we saw Dave Kennedy up ahead of us and Kev said we should try to catch him. He quickened the pace and opened up a gap on Brad and me of about 20-30m. After a km or so though he slowed back to us and said that he didn’t think Dave was going to blow up.

We continued to gain on Dave though and were pretty close to him as we crossed the Narrows. Close enough to see Gary Carlton do an excellent job as marshall in preventing an arrogant cyclist from riding through a stop sign when Dave was crossing the road. As we ran past, an argument was on in full with the cyclist bleating "but you’re not a policeman … " – classic.

Gary's comment in this week's Hills email was that "A few Lycra clad cyclists with a peanut for a brain would be even worse off after their selfish behaviour at the Traffic Control points. I think they must sell cyclists’ Lycra clothing with a free do-it-yourself frontal lobotomy kit".

We caught Dave just after Mends Street and Kev put his foot down increasing the pace to what must have been about 3:45/km. It was too quick for me and by the time we got to the big flagpole, Kev had opened up a big gap, Brad was running away from me too and then Dave passed me back. I think I was feeling the accumulated effects of the hills and wind of Rottnest over the previous week. Not sure what my pace was but probably dropped to somewhere around 4:05-4:10/km pace over the last couple of kms.

Rox and Sammie and one of Sammie’s friends came down to the end of Hurlingham Street to give me a bit of a cheer as I ran past which was just what I needed at that point. Gave me a real boost although it didn’t help my pace much.

2:08:28 is 9 mins quicker than I ran this race last year and although last year was slightly long, my average pace per km was 4:15 compared to 4:00 this year. Unfortunately for me, Kev ran 6 mins faster than last year and beat me by a minute. Finished 9th overall and 2nd in M40-44. 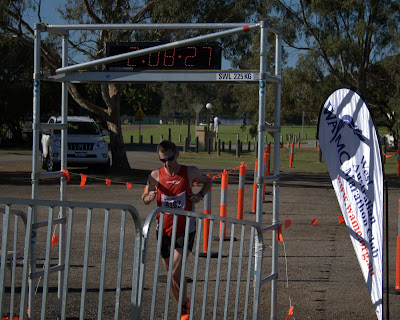 Good signs for going sub 2:50 at the Perth Marathon though. With a few more weeks training and some more specific MP and also VO2max work and then a taper, if things go well, I should be in shape to run this pace for the full distance. Having someone to run with though will be a big factor so hopefully there will be a few of us around the 2:50 mark – it seems like Kev definitely will be.

I did a 2km warmup and a very slow 2km cooldown so 36km for the day. Pretty tired in the afternoon and lots of twitching in my calf muscles. No chafing, back soreness or any of the other problems I sometimes get so otherwise very good.

Due to the day off, no medium long run and the short run on Saturday, total for week 11 was only 88.8km.

All good so far this week and will be back over 100km with also first interval (6 x 1km) session done.
Posted by Biscuitman