Against my better judgement I wore my new 2130s on yesterday's long run but more on that later.


Thursday - This was the hard session I mentioned in my last post. Unfortunately between typing that out on Wednesday and running it on Thursday morning, I had some sort of brain freeze. Session had a 5km warm up and 5km warm down with 3 x 15 mins of threshold running at different paces with 1 min active recovery in between. Somehow, I re-interpreted this to 3 x 5km of threshold running at the vaious paces with the 1 min rests.


Ran down at met Simon at the Causeway where I turned and we then ran the "long bridges" run in the reverse direction from normal. My re-interpretation meant that we were doing 20 mins at marathon pace, 19 mins at half marathon pace and 18 mins at half marathon/10km pace. Simon was half way through a big week for him and I think had already run over 100km this week so I don't think the re-interpretation was fully appreciated :-)


We went out too fast and ran most of the first interval at sub 4 min/km pace. The other 2 intervals hovered between 3.50/km and just over 4 min/km. No wonder really that we couldn't keep to the correct pacing, the last 7 or so minutes of the 2nd two intervals were real slogs. I'm not sure of the overall distance with warm up and warm down but estimate it to be between 21 and 22km. 1 hour 29 mins all up for me which included a pretty slow km or so after the last interval before I got back into my stride.


Even though I cocked it up, 57 mins of running at threshold pace is still a fair workout. It's 13 minutes more than the workout called for. The work out is a Brad Hudson workout from an 85 mile a week marathon program which would also be about a week ahead of where I am now. So although I am annoyed at my stupidity (situation normal - Rox reckons - hey who wrote that ) and guess I will have to start writing things down on the back of my hand like a teenage girl so that I don't forget, I don't doubt that it will be beneficial in the long run. I would like to try and do it again (properly this time) but I will need to see where in my programme I can slot it in as I have other key workouts including a few on the track that I don't want to compromise.


I wore my old 2130s for this workout and as usual they were fine.


Friday - 8.4km recovery run. Can't remember the time but it was on the quicker side of normal. I do remember the HR though - 121 average which I was very pleased with. Rox reckons that I haven't even woken up when I am out on these runs (as awake as normal - Rox reckons for real - who's writing stuff in my blog?). I don't know about that but it was very re-assuring to have such a low HR after a hard workout the day before. Wore my new 2130s without any issues.


Saturday - Decided to run with some music for the first time in ages so loaded up the iPod the night before with Nick Cave and the Bad Seeds, then finished off with a couple of Johnny Cash tracks and then some classic Radio Birdman to bring it home. After yesterday's problem free run with my new 2130s, I decided to wear them for this run as I remain concerned about getting a sore back from wearing my old shoes and figured that 32km would be the type of run that might cause a problem. Bad move ... the numbness/hardness in the left midfoot became really noticeable from about 15km and got worse to the extent that by the end it felt like bruising and was almost causing a limp as I ran. Not sharp pains though and not actually making me limp so I pushed on. I haven't ended up with a bruise though so am bewildered as to what the problem is. I am definitely going to take it easy in these new shoes before I take them for a long run again and have replaced the inner soles with some from an old pair in the hope that this will help.


2 hours 24 mins again for this 32.2km run which was the same as a fortnight ago. Last time I stopped for 2 gels but this time I only stopped for one but did have to have an unscheduled stop after about 35 mins which took longer than a gel stop would have. As a result I think my actual running time was slightly less this time (so probably quicker than 4.28/km pace), which given my shoe issues is not bad.


What have I learned:

1. Follow my initial instincts and don't run long in new shoes until they are well worn in.

3. I have coped very well with 110km this week and can afford to increase my mileage a bit more (finding the time is the hard thing).


Sunday - Not a great start to a rest day. Got pinged by a multinova on the way to Ben's soccer doing around 76km/hr in a 60 zone (Canning Highway) so I can look forward to getting that in the mail. I'm usually pretty good but was slightly distracted and that's all it takes. We lost 3-1 to East Fremantle but it was a good and pretty even game, we just had trouble putting the ball in the back of the net. A huge improvement since the start of the season, we even put four passes in a row together a few times today.


This afternoon, Ben and I rode into town (me with Sammie on the back of Rox's bike - I always feel like the witch from the Wizard of Oz riding Rox's bike as it's a ladies bike and the frame is too short for me). Ben had some credit and a voucher to spend at EB Games so it was a nice outing and a casual ride around the river.


I'm a bit envious of those getting ready to run the inaugural City to Surf marathon at the end of the month and think that I probably could have got myself ready for it if I had started early enough but I set my sights on Rottnest thinking I would need the time to recover from Boston. I recovered a lot better after Boston than I did after my first marathon. Still over 2 months to Rottnest which seems a long way away and I hate feeling like I am missing out. Still, I think I'm half a chance to crack 45 mins in the 12km which would be very satisfing and hold me in good stead speed wise for Rottnest.

I think the City to Surf marathon course will be hard but there should a great atmosphere on the populated parts of the course. It will be interesting to see what elite male runners turn up. My initial instinct was that it will be 2nd tier Kenyan and Ethiopean (ie 2.14-2.18) runners and I still think this might be the case. $25,000 is a big pay day for them especially if they are not in the top echelon who could challenge for one of the really major big city marathons.

I believe the start procedures are changed for the 12km this year. I think this is as much about keeping the 12km runners and the marathoners separated as it is about keeping people in their correct start categories. Not sure if it is true that fat arsed women wearing Curves t shirts and walking 4 abreast ahead of runners in the B and C categories have to wear a "Wide Load" sign on their backs this year but I do understand that there will be better separation between categories as a result of marshalling down on the Esplanade.

Still don't think that it is anything the judicious use of a Taser couldn't have solved.

Talking about initial instincts, I still maintain (with the necessary Manou in for Haddin change) that the side I selected was a better choice for this Test. Not sure what they are going to do next Test without any specialist middle order batsmen to come in as I think North and Hussey are both struggling unless they get a decent score in the second dig. I don't think both of them will be dropped but it will certainly be interesting if Haddin's finger is good enough for him to play as a specialist batsman. I think that there might be a temptation to get Hughes back in but hard to displace Watson at the top of the order. Have to say, I'm loving watch Manou keeping - really soft hands. Haddin is lucky he can bat. Stuart Clark MUST play. (Rudi Koertzen MUST go!)


Only slightly disappointed that the Bulldogs didn't give the Dockers the flogging they deserved as it was great to see Brad Johnson hit 342 games and break the club record. 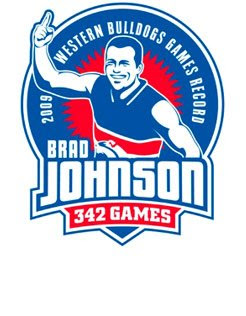 A good read as usual ! 'Wide load' indeed... looking forward to seeing how you go at C2S. Should be a good day if the weather's like it was last year.