Unfortunately the Strands online training log and social media site is closing down on 30 December after only about three years of operation. It is a real shame as I thought the site had great potential but it seems that the business model was all wrong. How a site with hundreds of thousands of users (mainly in the US and Spain) could fall over within three years before it was even apparent how the site was intended to make money is bit of a mystery (to me anyway). The Strands company seems to have other products but they are products for businesses rather than consumers but there was no real cross promotion of these either.

As far as the Strands Fitness site was concerned, there was the Strands race/event registration service (which was only available in the US and seemed to have limited promotion and take up), the recommender service which appeared briefly and which recommended a limited range of products supposedly based on your interests and the sponsorship of the Strands Team athletes by initially by Puma and then by Mizuno.

I would have thought that Strands was perfect to complement a shoe company's online presence, attracting people to their website on a regular basis and creating a "community" and with it brand identification and loyalty.  While the star of Puma as far as running goes is undoubtedly Usain Bolt, they have also invested in an ongoing video series around Delilah DiCrescenzo, a steeplechaser who although she finished 3rd at the US Nationals this year (because the runner in front of her fell at the last water jump), her main claim to fame/recognition seems to be that she is not bad looking and was the subject of a Grammy nominated song by  a band called the Plain White T's a few years ago.  Equally, Mizuno could have made a lot more of its association with strands and its sponsored athletes, so there appears to be opportunities there that were not taken.  Basically Strands needed to show that there was a tangible benefit in the product and the community it had created but it seems to have failed to do so.


I am also a bit disappointed because I encouraged a lot of my friends to get onto Strands and now I feel like they have been left in the lurch.  Even more though, I feel pretty bad for the guys at Strands like Seamus Nally and Mike Reneau who have lost their jobs through no fault of their own.


At the end of the day though it is a business and there are other options.

After a bit of research, I have decided to go with Runningahead.com as my online log into the future.

It has as many, if not more, logging functions and options as Strands but does not look as good. It seems to lack some of the social aspects which I loved about Strands but it does have a forum and the ability to set up groups or teams but I haven't worked this out yet.

It also has some pretty cool reporting and graphing functions. As well as importing all my Strands data, I have managed to create csv files of both my Nike+ runs (from when I started running after my 40th birthday) and the 5-6 month period between when I stopped using Nike+ and started on Strands (luckily my blog was pretty comprehensive as a log at that time). So I have pretty much my complete post 40 years old running history.

As an example of the graphing functions, here is the progression in my yearly mileage (kms) since 2007 (2007 is only 8 months May-Dec): 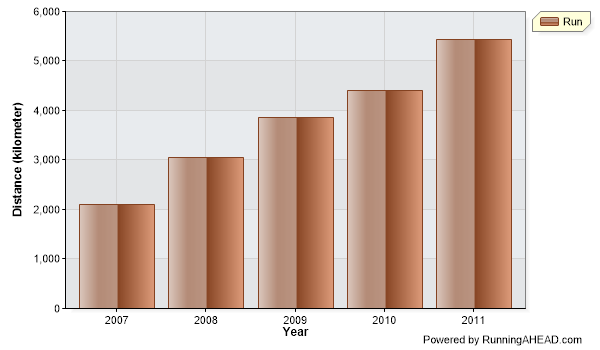 It also has widgets for your blog so I will be replacing the Strands widgets with Runningahead ones in due course. I am actually going to maintain dual logs for a  short while until I am fully comfortable with Runningahead and find out how it all works.
Posted by Biscuitman

thanks! i was looking for some site to move in from strands! i will try it.

I was also sad to see strands gone. Interesting to hear about some of the potential reasons for its demise. I'd be interested to know how runningahead compares to strava. I liked strands better, but I am starting to enjoy strava a bit. Good to keep ones blog going even if its just an occasional thing which I have done even after going on strands...plus I have always had my offline training book anyhow. Will check out runningahead , and maybe explore if there are other good online options soometime... Thanks strands we will miss you.