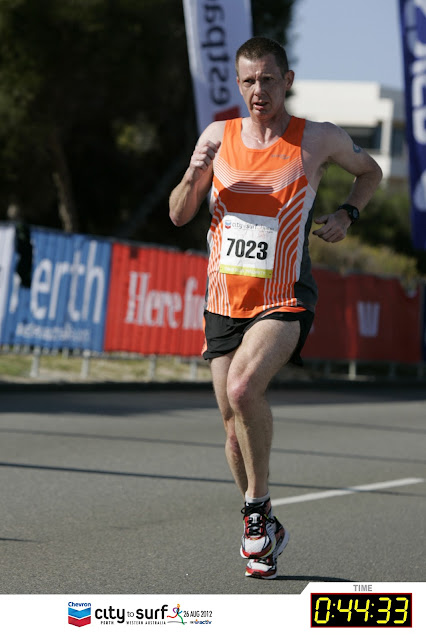 Melbourne Marathon training weeks 9,10 and 11 (including Perth Half Marathon, City to Surf and 42.2km training run).

108km in week 9 which included a pretty disappointing run in the Perth Half Marathon.  Although 1:20:27 was a PB, my half PB was pretty soft and after that race it still is.  Felt really good early but struggled from about halfway when I slowly died.  Couldn't maintain my pace and it became a real slog.

Possibly went out a little quick with 3:32 and 3:36 for first 2km but it felt a easy as marathon pace.
Slowest 2km were over the Windan and around the inlet in East Perth but my pace had already drifted to around 3:50 by then.

Got passed by Dave Bryant and another guy with about 1km to go to go from 9th to 11th to top off a pretty average effort. Really disappointed not to be able to finish strong.

Not sure what went wrong.  I used a Roctane GU gel instead of an SIS gel and couldn't get it all down but I shouldn't have run short of carbs in 80 mins in any case.

Conditions weren't the best and running on my own for pretty much the whole way was hard especially into the wind.

137km in week 10 which included a really good tempo run on the Friday backed up with my best ever long run on the Saturday.

I took it pretty easy early in the week to make sure I gave myself some recovery time from the half although I did put in a solid 24km medium long run on the Wednesday and doubled on the Thursday.

Friday's tempo run was 18km with 12km @ tempo effort.  It was a bit windy and I had a 3 hour long run scheduled for the following day. So the plan was to run a controlled tempo to give myself a good aerobic workout but not thrash myself in anyway that would make Saturday's long run any harder than it should be.

Managed to achieve that and felt like I could have gone on for a bit further.

Averaged 3:44/km for the 12km so this probably reinforces my thinking that if I had gone out more conservatively in the Half (ie at 3:45/km pace), I probably could have run under 80mins and finished strong.  Oh well, I felt in shape to go quicker and I guess I won't die wondering.

On the Saturday, the plan was to run 4:35-4:38/km and only take one gel.  But ... I ran with music for the first time in ages and after about 12km, things really clicked.  Great songs (Living for the Weekend  by Hard Fi, some classic Radio Birdman etc) were coming on at the right time and I got a bit excited and was really enjoying myself.  I was running 4:00-4:06/km very comfortably and my overall average pace got down under 4:15/km (which is 3hr marathon pace).

When I got into the back of Maylands, I ran into the Parkrun 5km at about the 2km mark of the race.  I think I was about 8th or 9th at the time but by the time it finished in East Perth, I was 4th.  It was around this point that I realised that if I could maintain sub 4:15/km pace for the rest of the run, by the time I had been running for three hours I would have run more than a marathon.  So that became a bit of a challenge.

Had a slight tailwind out to UWA where there was a dolphin in the river and then things got a bit harder on the way back with a head wind all the way to the Fisheries building.  Interstingly the song that started the exact moment I turned into the wind at UWA was The Test by the Chemical Brothers (with Richard Ashcroft on vocals) so again that was perfect timing.

Rage Against The Machine got me through the last few kms and I finished up covering 42.2km in 2:57:45

Only stops were in the first km when I found a wallet on the road and tried to find an address to return it to  and then 1 pit stop and quick 2 drink/gel stops.  Total time out was 3:03.

This felt pretty comfortable considering the distance but I was very mindful of the need to recover properly, especially with the City to Surf 12km coming up the following Sunday.

I was supposed to travel to Canberra for meetings on Wednesday through to Friday but I got asked to attend an extra meeting so had to fly out on Tuesday.  This mucked up my plans a bit as I had intended to do some 800s or 2mins on/off on Wednesday.  In Canberra, really cold mornings were forecast and I have experienced slipping on icy pavements there before so decided to restrict myself to the treadmill in the hotel.  As it turned out, there was no ice and treadmill drove me bonkers so I wish I had got out although in a way it was probably a positive as it forced me to take things light and easy.

I did treadmill runs on Tuesday PM, Wednesday AM and PM, Thursday AM and Friday AM.  Had a 20min exercise bike ride in there as well when I was waiting for the treadmill on Wednesday morning.  Nothing more than an hour and all at a pretty easy pace except for a hard 5 mins at the end of the Wednesday PM run.

On Saturday morning after I got back I did my usual pre race 6km + 6 strides.  Didn't feel great as I felt a bit tight in the upper body and diaphragm, probably from sitting in meetings and on planes.  Actually had a bit of a stitch about 3km into this run but it passed in a km or so.

Strides felt progressively better.  I had a slight head cold but nothing serious so was hoping it would improve rather than worsen.

This morning I had a really great run at the City to Surf which I really needed after my average half and also after running pretty badly the last couple of years in this race.

I am very happy with this race which was the complete opposite of last year's effort.  Went out a bit more conservatively but really worked hard on the flat sections.  As a result I was able to run the second half of the race much stronger and although the hills on Oceanic Drive were hard work, I was not dying and being passed by people this year but was holding my position.

I was behind Craig, Jordan and Ben until we go to the hill at Underwood Ave and then we ran together for a bit.  Unlike the last couple of years where I have run like a dog through Perry Lakes, this year I was able to pick up the effort and run much more strongly.  3:30 for the 9th km set me up for a good last 3km and finish.

Picked up a couple of runners on the Oceanic Drive hills although one of them did pass me back and I wasn't able to get him again before the finish.

Was able to run pretty hard over the last 400m and take 50 secs off my previous best on this course (from 2009).  I finished at 44:33 which is around 3:41/km average pace. (Results out on Monday show that I was first in the M40-49 category so this is probably the biggest "win" I have had since taking my running more seriously over the past 5 years).

Total km for the week was only around 86km (not including warm up before and jog across the city after the City to Surf) so time to turn the volume back up!

Main runs were my medium long runs on Tuesday and Thursday, a quicker session on Friday where I did a time trial between the Windan Bridge and the Causeway and then a really solid long run with Rob and Craig on Saturday.

The next day I ran with Rob and Craig on the Mt Yokine course.  We did 5 loops for a total of just over 35kms.  Felt a bit tired at the start after a late night and an average sleep.

I wasn't feeling great for the first 10km and the first ascent of the hill was a bit of a struggle and I felt very tight in the lower legs.

Slowly came good though and each hill climb felt better than the previous one and on the way back to Rob's I felt better at 30km than I did at 10km.

I was a bit weary on Monday this week but was able to get through a good modified Mona fartlek on Tuesday.  I don't like the 15sec reps at the end of a Mona fartlek so changed them to 30secs.  Stuffed it up slightly and had too many so session was 22mins instead of 20mins.

Reasonably happy with the pace but would have preferred to be slightly slower on the reps and quicker on the recoveries.  I was running sub 3:20 on the reps which I think was probably as quick as I have run on this type of workout and although it makes it hard for a comparison, maintaining the effort over another 2 mins also felt good.

Perth Half Marathon this Sunday so the remainder of the week has been pretty light on.  I feel like I am in shape to have a good run so am really looking to the race where there should be a decent group looking to run sub 80mins.