Running for the Hansons - book review 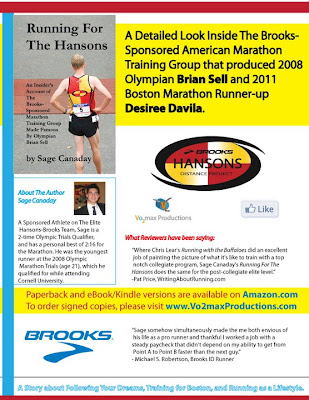 I recently purchased the book "Running for the Hansons" by Sage Canaday. Canaday is a member of the Hansons Brooks Distance Project and his book is an account of the day to day existence of a runner on the team.

It is nowhere near as glamorous as you might expect as members of the team are required to work in the Hansons Running Stores as part of the deal. They don't work full time but when you add it to the high mileage program that that these guys run, you can see how it could become a real grind and why there is a relatively high attrition rate.

It is a self published book and contains stuff that probably would have been cut if professionally published but I think this adds to the honesty of the account.

"I almost shit myself today. Every runner knows the feeling of the in and out. It's like a turtle popping his head in and out from his shell ... except the shell is your ass"!

No details are spared, with accounts of workouts, races, the daily and weekly regime and the team and team environment.

It was after reading this book that I decided to go with a higher mileage program this time around and include double days. I felt like I had gotten an insight into what it is like to get it done every day and callous yourself against the fatigue and workload.

Here are a few videos which also provide an insight into the life of Hansons runner and what is in the book.

137km last week. Main workout was a marathon specific long run which ended up being 28.7km with 12km at marathon pace.

Wasn’t feeling hugely motivated when I woke up in the morning but I knew I had to get it done or the guilt trip I would impose upon myself the next day after others had run the Freo Half and Simon had done Berlin would have been a major one.

Consciously made myself slow down early in the run so that I was running 4:30/km rather than 4:20/km which was the pace I was naturally slotting into.

Ran the 12km from the gazebo in Maylands to just before the big flagpole. I was initially planning to do 13km MP but settled on 12km. I definitely could have kept going for another km at that pace but didn’t want to turn and didn’t face the additional km cooldown home. Pace actually picked up thru the 12km – the second last km was a bit quicker than it says as satellite seemed to get lost under the trees near the Swan River Trust as pace jumped up to 4:10/km. Averaged 3:55/km for the 12km MP segment which is right on pace.

Earlier in the week, I did a couple medium long runs and then on Thursday I did the regular Thursday morning run with Clown out to Maylands – we tempo ran back from the Police Academy to Windan at around 3:42/km pace.

Two double days again last week - missed the second run on Sunday as I left it too late after watching the Berlin Marathon and then family life intervened.

Unfortunately, Ben's team lost their grand final although Ben had a good game. He never stopped trying 100% even when it was clear the game was lost.

With soccer season now finished, I am going to move my long run to Sunday which will alter the structure of my whole week slightly. I think it will help in getting in two medium long runs during the week and then and a bit more quality on the weekends rather than just recovering from my long run on Sunday.

Here are the videos from the 5th Avenue mile

First week of my "official" marathon training program completed - 134km including two double days. It was supposed to be three but I piked out on the second run on Sunday. 134km was 10% more than the previous week's 122km and the weather was pretty gross ...

I am finding the increase in mileage pretty tiring and think it is the double days that are the difference. I am coming off a good base with 6 of my last 8 weeks being over 100km and the two others being in the 90s. I think also that I may be running my easy/general aerobic runs a bit quick as they are usually at around 4:25/km pace or even slightly quicker. This is however right in the middle of the range on the McMillan calculator.

I am going slower on my specific recovery runs on my double days and also on Fridays but I will keep an eye on this as I need the recovery if I am going to hit the workouts at the correct pace/effort.

I am excited about the Berlin Marathon this Sunday. It is being shown live on Eurosport on Sunday afternoon. Simon Elliott is running and there are couple of other decent runners in Haile Gebrselassie and Patrick Makau lining up as well. It will be interesting to see how Paula Radcliffe goes in the Women's race.

Here is a rare video from the recent meet in Milan - David Rudisha beaten. It has been a long season for him though.

I'm looking out the window now as the rain has come in and not exactly looking forward to my afternoon run - oh well ... 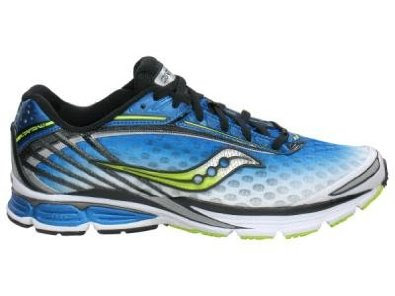 I took these for their first spin this morning.  Awesome cushioning without compromising on weight.  Although slightly heavier than the Mirage, they are lighter than an Asics DS Trainer.
There is a good chance that these may become the 2nd shoes in my rotation behind the Kinvara but ahead of the Mirage.  Not sure yet, it is too early to say.
The Cortana incorporates a heel fit mechanism that keeps the foot embedded and provides some addtional  structure.  It has the what is now standard Saucony 4mm dropped heel for a  more supportive yet natural ride.
Posted by Biscuitman 1 comment:

I have waited so long now that I am over the City to Surf and the fact that I didn't run as quick as I had hoped I would.

Thank you to everyone who donated via Team World Vision. We raised $632, well over the $500 target. I'm sure our donations will save lives if they haven't already so thanks again.

At the end of the day, I ran as best as I could. This must just have been where I was at that moment. A minute or so quicker than last year but 37 secs slower than 2009.


Struggled on the hills and looking at my splits, most of the minute more that I ran was on the hills on Oceanic Drive as well as the hill on Underwood. I expected to slow down but not by that much.


Was on pace until about 6km and ran the pace I wanted to down Hay Street through Subiaco (3:34/km) even though Epi caught and then gapped me along that section. For some reason I ran shithouse thru Perry Lakes. I remember really struggling through here last year as well but I lost more time here for no apparent reason.


It is ironic that I knew that the hills were my weak point and that it why I did the session on Mount Street that lead to my hamstring issue and which impacted on the type of training I could do over the last few weeks. Hamstring was a bit tight but only really felt it once when it grabbed on a downhill so it didn’t impact on me much during the race.

I have managed to keep my mileage up pretty much despite the hamstring issues. 94km the week of the City to Surf and I have picked it up since then with 120km and 122km over the past couple of weeks as an endurance base now I am just starting my 18 week marathon training program. I have taken it pretty easy on the speedwork to make sure that my hammie is OK with just a couple of tempo runs in that time.

This week will probably end up being around 130km. First workout of the program was this morning with a 19km medium long run with the last 6km at tempo pace.

Really happy with how this went as I was feeling like running under 3:50/km pace for the tempo section was going to be hard but I ended up running 3:44 average pace for the 6km tempo even with the last km back into the wind.

Pencilled in my marathon program last night and it includes a pretty decent increase in mileage on the last marathon cycle I did. I still need to finalise the specific endurance long runs (ie those with MP finishes or significant parts of it at MP). As soon as Ben and Sammie’s soccer has finished I will move my long runs to Sundays although I will do a 35km long run on Saturday 24 December rather than on Christmas Day!

Only problem is that I am not going to get in a half marathon tune up race as Ben’s team won their semi final (!!!) yesterday and the grand final is the same morning as the Freo Half. My back up plan was Melbourne Half but it has sold out. So looks like Deepwater Point 15km in November will be my main tune up race.

Ben had a great game. His team beat a team that they have been pretty even with this season (1 win, 1 loss, 1 draw) 7-1. It was 3-0 at half time. Ben set up the first goal with a great free kick from inside their own half.

The IAAF Grand Prix meet in Rieti the other night wasn't on Foxtel. It is always a great event for middle distance races. Here are videos of both the 800m and 1500m from Rieti - top fields in both events. Asbel Kiprop makes a world class field look very, very ordinary.