PB at the Run For Gold

Managed to take 12 seconds off of my 10km PB at the Run For Gold this morning. It was pretty cold but did a good warm up even though I found it hard to get a sweat up. It was very chilly riding the scooter there which may have been why it didn't feel too cold when we were waiting to start. Weather conditions were perfect though with no wind and a dry course (it's often a bit of a raffle with flooding this time of year down near Trinity College)

Very strong field in the 10km race this year with Raf Baugh and Paul Mackay running. Raf Baugh won in 31.05 by nearly 2 minutes.

Saw Sandgroper arriving for the 5km just as we were heading out for the start so didn't get to have chat other than good luck and didn't see him afterwards.

I went out at a comfortably hard pace without feeling like I was "red lining". For once there was a few people running at my pace so I actually felt like I was racing rather than time trialling. I was in a "group" of about 4 who interchanged spots for most of the race including the girl who was the first female to finish. She passed me between 7 and 8 kms but I passed her back on a sharp right hand turn about 100m later when she went too wide. This was just after the photos Rox took below. It was great that Rox and the kids came down to cheer at exactly the right point where I needed a boost.

I found it a pretty hard slog from 4km onwards but managed to pick it for the last 3kms which was pleasing (not at the time - only now when I have gone back and looked at my splits. I'm not sure what happens between 5 and 7kms but they were where I missed out on my chance to go under 37 mins.

The first female ran right behind me from about 7.5kms to the finish and I had to work really hard to hold her off. We passed one guy at about 9km with another about 10-15m in front of us. We were getting close to him as we neared the final turn but I had gapped her enough that she wasn't going to get me and then with about 30m to go I heard the guy who had been behind her (and who is in the background of the first photo) thundering up behind. I dropped the hammer and not only managed to hold him off but I passed the guy in front who I wouldn't have had a crack at if not for the pressure from behind so thanks young man in blue.

The girl thanked me for pushing her through, although I had to say that I thought it was her pushing me. She said that it was a PB by over a minute for her so I'm glad to have been of assistance.

My time was 37.13 and I was 13th overall and 3rd in my age group. As I predicted after his great run at the Gold Coast, I struggled to keep Simon in sight as he finished in 35.44 and 10th overall and 2nd in our age group. As I said at the start, it was a strong field this year. My time would have got me 6th overall last year.

Just as satisfying (well pleasing really) was that the soccer team that I coach and which Ben was captain of today, won our first game of the season 2-0. We have now been unbeaten for 3 games and the kids are really improving. Lots more running off the ball and supporting their team mates as well as better organised at corners and throw ins. It was a real thrill to see the looks on their faces today and while it isn't all about winning, it isn't much fun losing every week either and it was a deserved reward for their perseverance.

What else did I do this week?

Thursday - 16.5km (approx) with Simon in 69-70mins. Pretty wet out there with lots of flooding on the paths and surrounds.

Saturday - 8.4km recovery run. Ran this a bit quicker, not sure why. 44mins and as a result average HR was bit higher at 140.


Last night of the Tour de France tonight and all I can say is that I can't wait for next year with Lance Armstrong coming back with a new team. Hopefully his Radio Shack Team will also take part in the Tour Down Under in South Australia next year as well.

(Apparently, some people thought that my last post about the Tour was bit negative. "Grumpy Old Man" and "You should call it Biscuitman Whinges" were two pieces of constructive criticism. I'll try to keep it a bit lighter from now on.)

Splits (I didn't miss any, they just weren't there): 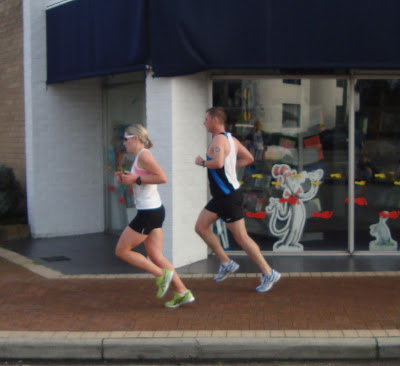 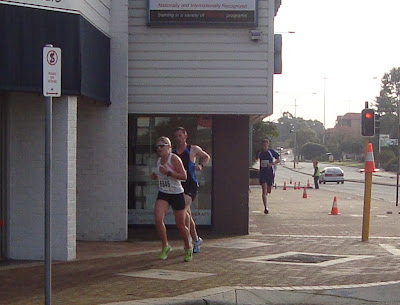 Clown and I were out long running in the area and thought you might go close to sub 37 - not far off.

Congratulations on an excellent PB! run. Well done. Nice to see Radar put another win on the board with his 31.05 before he trys to take the World Duathlon title in the next two months...Interesting news about Radio Shack team for Lance, he'd have to be a chance to win another one the way he is going, and its not impossible for him to reel in Contador at this stage...Bring it on!

Congrats on another pb, well done and continues a great year for you.

Still think the Bullies are a great chance, picked the Saints on the weekend as they're very hard to be at Etihad

Thanks guys - a bit annoyed I didn't get under 37 mins.

We can't beat teams like St Kilda if players like Brian Lake are having a bad game. Not the end of the world but probably suggests we need to be at our best and Saints/Cats slightly off if we are to beat either of them in the finals.

The cricket is a worry - Johnson bowled rubbish again against Northants. McDonald took wickets but we need to take 20 to win a Test and he's not the threat we need.

Thanks for passing by! And fantastic job on those runs--you sure are speedy.

Good run! It's great to race in a group, it definitely extracts a bit more out of you. 'They' do say that kms 4-7 are the toughest mentally in a 10k race (and we all know this from personal experience as well...). Maybe you have to consciously try to pick it up when you feel yourself dropping the pace. Do you think your first couple of k's were a little quick ? I'm guessing you settled on around 3:45 for 2-4 which would mean you were 3:25 for the first two ; I seem to remember at the Bridges the first two were pretty quick as well, possibly pushing you over a threshold where you need a few k's to recover. IMO there's no such thing as 'time in the bank' for any race over 5k...

Reckon you could be right Sugar although it didn't feel too quick at the time. I think the marathon relay was another case of the same. Something to concentrate on at the City to Surf where the Mount St hill is a complicating factor. Think I might have good 3km time in me if I ever get a chance to race one at the right time. It would be nice to go under 10 mins someday.

There's a 3 or a 5 at Coker most Thursdays. Come on down ! I've emailed you the program...