A big girl's blouse (or riding the wind)

Apologies to Anton Krupicka for the subtitle to this post.

I was supposed to do 21.5km this morning and planned to run the Windan/Round the Bridges Loop continuing down the Freeway to Como and then back through Kensington. Ran down and met Simon at Burswood. As we got onto the City side of the river, the wind picked up and it was really hard going from then on and over the Narrows. So we piked out and ran along the South Perth side of the river with the wind behind us instead of into the wind down the Freeway. I think Simon was still going to add some on the end of his run but I just ran home for 18.7km in 1 hour 20 minutes which is roughly 4.16/km average pace.

I took Ben and two of his friends to the Perth Glory vs Fulham game last night. North Qld Fury vs Wolves was the curtain raiser. I was keen to see Marcus Hahnemann and Kevin Doyle, two ex Reading players in action but neither of them played. Robbie Fowler came on in the second half for North Qld. I don't think he provided many answers for Nth Qld other than to the timeless question of who had eaten all the pies (see photo). 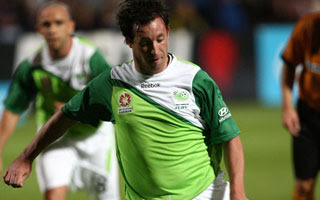 Unfortunately we left the Glory game about 15 minutes into the second half when a big squall hit. The Glory 2-0 down, horizontal rain and strong winds plus 3 ten year olds was enough for me to call it quits (Big Girl's Blouse example 2) and I think the boys were happy to go then as well. Final score was 5-0. It was pity the weather came in and spoilt the evening. There was a good crowd in and other than the limited food choices (nothing out of the ordinary there)it was pretty well put together as an event. I don't think the tickets were overpriced given that we were watching Premier League teams but it was a lot of money to sit out in the open at night in the middle of winter. We definitely need a better (rectangular) stadium in Perth.

He he - yep, I did a massive extra 1.3km to round it off to 20km. I figured you were going to do a little George Street loop or you would have kept on truckin' down to the Causeway with me. Suddenly you were gone!

I contemplated carrying on to the Causeway but that would have meant running back into the wind again on the way home!!