I feel like I am in close to PB shape over the shorter distances but haven't been able to put it together on race day.

Very unusual start which involved running over the mat and then making an immediate 90 degree left turn. 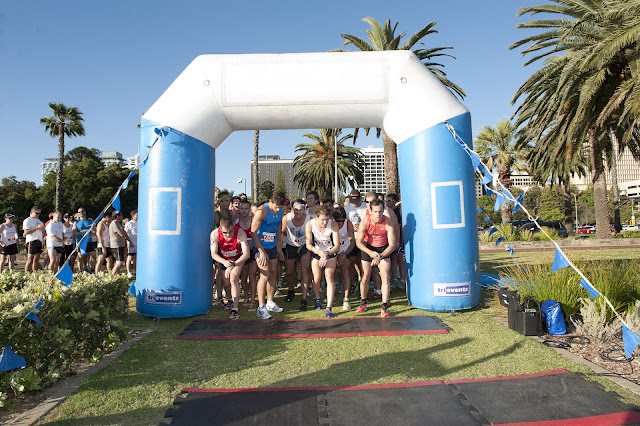 I settled into a hard constant effort but did suffer from the hard first km and then the last 2km into a strong headwind.

Ran as hard as I could and pleased that I ran just under 18 mins.  Felt a bit nauseous towards the end which wasn't assisted by a big steaming cloud of cooking sausages over the last 100m or so.
Congratulations to Jodie Oborne who was first female in 20:07.

Not a very deep field for this race.  Martin Feichtinger took it out at the front and beat me by about a minute.  One other guy and the first female went out hard but I passed them before the Windan bridge and then it was pretty much a time trial from there.

Hard work into the wind over the last 1.5km and missed my 5km PB by 2 secs.  Legs felt OK and I think if I had pushed a bit harder or had someone pushing me I could have run a PB.

Better run than Thursday with a more even effort (although the headwind was nowhere near as strong).

I set out in the hope of running a similar pace to last week's 5km but extend it out over the 7.5km.
Managed to hold it for 5km but came unstuck at Canning Bridge up the steep little zig zag path and then the run home into the wind.

Felt like I pushed pretty hard but could have gone harder if I wasn't a bit soft.

Liam Fuery 1st, Mark Lee 2nd, me 3rd with big gaps between all of us so again a bit of a time trial.

Pretty satisfied with this as it is partial redemption for my effort here over 7.5km in 2010 when I went into the race feeling good but ran like complete dog in about 28:15.  This year, based on my Garmin splits I went through the 5km in 17:41 which is equal to my 5km PB and have gone under 27mins for the 7.5km.

I have been getting in one or two quicker sessions a week lately.  The sessions I have done include a modified Mona Fartlek (2 x 90secs; 4 x 60secs; 8 x 30secs with equal time float/recovery after each); 10 or 12 x 1min on / 1min off and also a Ladder Down workout which consists of a warm up then 6min, 5min, 4min, 3min, 2min, 1min, 30secs with half duration jog recovery between before a cool down.

I have had a tight left hamstring which seems to be referring from my adductor or glute.  A couple of massages from Nathan have improved things considerably.  I can't feel it when I am running quicker but it seems to be most noticeable before I have warmed up and when running more slowly, especially if I have to step up a kerb or similar.  Nothing major and easily manageable at the moment.

Next race - City Beach on 16 December