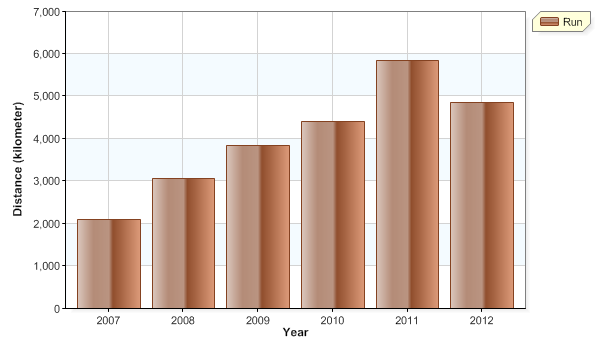 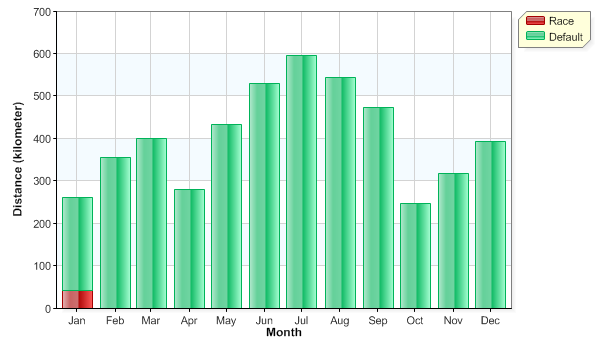 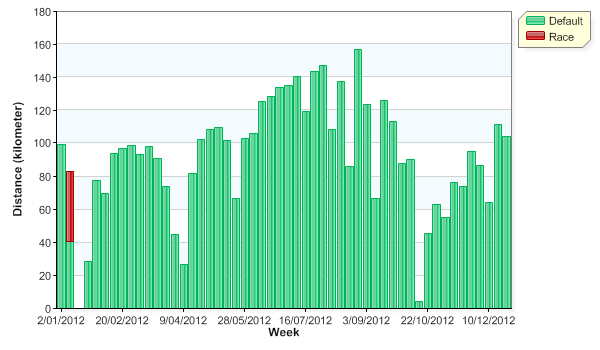 The graphs above show my yearly kms since May 2007 through to the end of 2012 and then my monthly and weekly kms for this year.

This year's 4840kms is about 1000kms down on last year when I averaged 112km a week across the whole year.  The big contributing facto to that difference was that last year included preparation for two marathons whereas this year only included one (Melbourne in October).

Looking at the weekly graph above, I think one of the reasons why I missed my goal in Melbourne is apparent.  After a good base in April and then a build up starting in May through to the end of July, my weekly volume then became very sporadic with only 4 weeks over 120km and not really stringing together a solid block. I think that the fact that I kept hitting my target paces during my marathon specific long run workouts, lulled me into a bit of a comfort zone.  I'm not going to go back at those weeks (there was a week of work travel and also a bout of bronchitis in there somewhere) but I will make sure that I don't make that mistake again as I prepare for the Canberra Marathon.

I managed to set a couple of PBs this year with 2:44:21 at the Houston Marathon in January and then 1:20:27 at the Perth Half Marathon in August.  My half marathon PB is probably still a bit soft, as I had a crack at running 1:18 at the Perth Half and blew up so hopefully I will get a chance to run a half when I am in good shape at some stage this year.

I wasn't able to break my 5km PB this year, despite a few attempts late in the year but good runs over 7.5km (26:54 at Deepwater Point) and 4km (13:54 at City Beach) in the same period indicate that it was there for the taking if I had got the right conditions.  My two attempts at a 10km PB were both affected by illness which was a pity because I had managed to put together a solid preparation for both, especially the Bridges 10km.

I am now starting to build my volume through the introductory part of my Canberra marathon training and will really ramp it up in the New Year.  Last couple of weeks have been 111km and 104km so that is a reasonable starting base, especially considering the heatwave conditions we have been experiencing.

Houston! Melbourne, C2S! all three pure brilliance. The graphs show many years of consistent persistent hard work. Admire that!! All the best with Canberra, and keeping the momentum of improvement. Will be following your progress for sure, along with scores of other aspirants. Should be a BIG year!