Felt much better for this week's race than I did last week but based on time, I ran even worse. Felt fine in the warm up and for the first few kms but wasn’t able to run at or maintain the pace that I wanted. I feel fit but it is not being reflected in my race performances. Maybe I am still a bit flat after the marathon or more likely, I don’t have the specific endurance for 10km at the moment.


Big Kev went out very quick at around 3:20/km pace so I settled in just behind Simon Elliott. At about 2km, I heard the familiar stride of Clown coming up behind and we ran together to just past the 5km mark where he opened up a bit of a break on me. We had gone through 5km in around 18:00 and I wasn’t feeling too bad so at that stage I was still entertaining thoughts of finishing strong and going under 36 mins and perhaps even a PB.

As it turned out though, I just slowly faded and my last 2kms were not great even though at one stage just after the 8km mark, I was pushing on and my Garmin indicated 3:35 pace – I obviously did not maintain this pace, even though I was trying to maintain effort.

I still feel better about this week than I did about last week. Last week, I was frustrated because I felt that my chest issues held me back from running better whereas this week, I don’t think I could have run any better on the day than I did. I’m just not in the racing shape that I hoped I was.

Great to have a big crew of us racing today – made it into a real social occasion as well.

Official results show me as 17th overall out of 390 and 4th M40-44.  It's a pretty competitive age group with 6 of the first 20 in the race being M40-44 (all 6 between 9th and 20th).  Well done to Kev, Simon Elliott and Clown who all left me in their wake, especially Kev - normal service has been resumed it seems.

Interestingly, I ran 36:59 for 10km this week and last week according to my Garmin and went through 5km in 18:06 both weeks as well.  Much more consistent pacing this week though with the 5km from 3-8km all within 1 sec of each other.  Average pace was slower than what I ran for 13.9km at the Run for a Reason in May, so there is a real need to get back to the type of training that produces results for me. 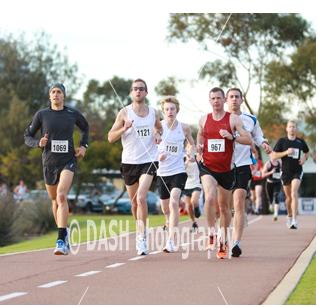 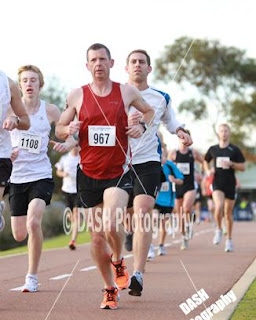 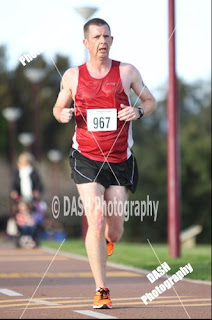 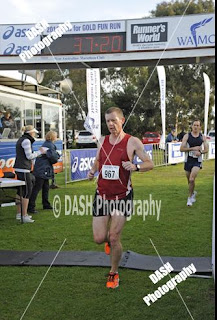 ﻿I have been back and reviewed the work outs I was doing before Bridges this year where I really surprised myself by running 35:54 as well as looking at what I have done in the lead up to races where I didn't do as well.
The common factor seems to be that when I have done well, I have been doing higher mileage including two medium long runs and a long run each week.  When I haven't done as well, it has generally been when I have specifically targeted the 10km or 5km distance and been running more speedwork in the form of intervals and tempo runs in the same week (ie two speed sessions per week).

So in the next few weeks leading up to the City to Surf, I am going to go back to what I feel most comfortable with - medium long runs on Monday or Tuesday, medium long run on Thursday sometimes including 8km tempo, 2 hour long run Saturday.  In between, recovery runs and some hill reps and occasional interval or Mona fartlek sessions.  I am going to try and get four runs a week beyond 80 minutes.

I find medium long runs are much more enjoyable than intervals and I will continue to build some progression into them where possible so it won't be as if I am slacking off.  Getting the mileage up should also work well as I transition to marathon specific training at the start of October.