I don't know why it has taken me so long to do this, but better late than never, here is a bit of a recap of our trip and the Houston Marathon.

We left Perth on the Monday and arrived in Houston on the Tuesday evening having flown on Emirates via Dubai.  About 25-26 hours flying and 4 hours in Dubai.  We went out that evening to the local Chinese restaurant and then crashed although Rox and I were awake pretty early the next morning.
Our hotel was in the Downtown area, 2 blocks from the Toyota Centre where we went to watch the Houston Rockets play on the Friday night which was Rox's birthday and about 4 or 5 blocks from Discovery Green where the Olympic Marathon Trials expo was on and where the Marathon started and finished.
We had a pretty quiet time in Houston.  Our major outing was to the Johnson Space Centre just outside of Houston on a bitterly cold day.  The temperature was in the 30'sF so about 1-2C but with a cold wind as well.  We went on a tour which was in an open shuttle bus and it was close to the coldest I have ever been.  Still a very worthwhile experience and we got to see a lot.  These are only the photos from my phone so I may add some from our camera in another post including the Mission Control Room that was used for the Apollo missions.
Probably the highlight for Sammie was the ice rink that was in place at Discovery Green.  For $10 you got skate hire and skating.  She ended up going four times and really enjoyed it.  She was very good after the first session and is keen to do more.

I ran three days in Houston, but didn't run the day before the marathon as I didn't wake early and also felt a bit self conscious about running around the streets downtown at the same time as the elite runners were warming up for the marathon.

I had already seen quite a few elite runners out running along the Allen Parkway on my morning runs including Shalane Flanagan (Nike), Sage Canaday (Hansons Brooks) and Emily Harrison (Adidas/McMillan Elite).  My main run before the marathon was on the Wednesday - approx 15km in 65 mins including 3km @ 3:50/km.  Was supposed to be 3km at marathon pace (3:54) but the 3:50/km felt effortless and I was starting to feel like I was in shape for a good run.

On the day before the Houston Marathon, the Mens and Womens US Olympic Marathon Trials were held on a loop course 1 x 2.2 mile then 3 x 8 mile.  This was my first experience of watching world class marathoners as a spectator (other than seeing them running past me in the other direction at Boston and Gold Coast) and I absolutely loved it.  Our hotel was close to the narrowest part of the loop and so Rox and I were able to walk basically the length of one block and see the runners go past twice per loop.

Before the race started we saw Benita Willis (who ran the marathon the following day, finishing 2nd and qualifying for the London Olympics) and Nic Bideau.  Benita was doing some strides after her morning run.

The photo below was taken at the start of the first 8 mile loop and you can see the gap that has been opened up from the chase pack after only 2.2 miles.


In contrast to the Men's race the Women's race was a very slow start in a big congested group although the main contenders made sure they were all to the front of the pack. 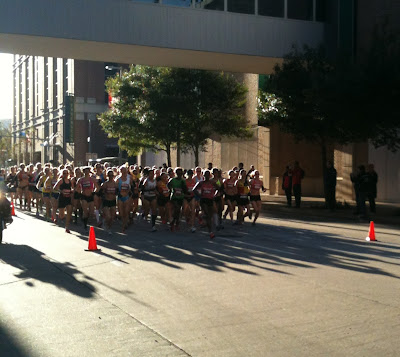 The same lead pack was together in the Men's race after 10 miles (Hall, Keflezighi, Abdirahman, Ritzenhein, Trafeh -photo below) 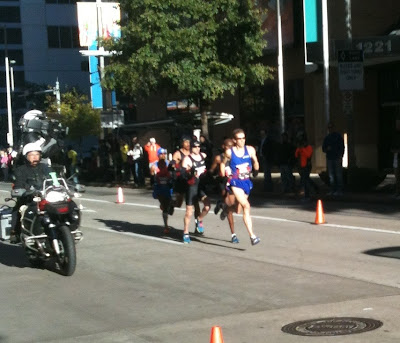 Here is a video I took on my phone as the Men's lead pack set off on the second 8 mile loop (10.5 miles in to the race)

Unfortunately, the rest of the decent photos are on the camera not my phone so I will need to add them later.

The day after the marathon, it was on with the remainder of the holiday to Orlando, Florida and Walt Disney World and the Universal theme parks.  We stayed on the resorts which worked out very well, especially at Universal where we got early entry (one hour before) and Fastpasses which allowed us to skip queues.  Universal's Islands of Adventure is where the Wizarding World of Harry Potter theme park is and was a real highlight of the trip.  The only downer of the whole holiday was that I was bit crook on the first full day we were in Florida after Continental Airlines allowed a sick passenger (who happened to be sitting next to me on on the plane) to fly.  He was late boarding and started throwing up before we had even pushed away from the airbridge.  Unfortunately, it seems that not delaying the flight by having to find and offload his baggage was more important than the health of other passengers.


After Universal we went to Walt Disney World where we stayed at a resort called the Wilderness Resort.  It was a massive hotel but we didn't spend much time there as we continued our theme park exploration.  That was probably the one thing we got wrong in our planning, we didn't program in any real rest days.  From the day after we travelled to Orlando, it was non stop theme parks for 7 days straight.  We did so much walking, especially at Disney where the parks were bigger and in particular at Epcot which was the last one we visited.
I only realised when we were on a stopover in Dubai on our way home on Australia Day that it was the Dubai Marathon the next day (Friday).  Not a great spectator marathon and it would have been a bit of an ask to indulge my marathon following any further but it would have been nice to break up the trip.  What a race as well, I think I read somewhere that the average time of the first 10 finishers was 2:05.

I have run every day since we have been back.  Nothing more than an hour and no workouts at all.  Just easy running, one shorter day then one longer day.  I'll probably start doing some pick ups within my runs next week and then maybe a Mona fartlek the week after that.

unreal effort mate
im hoping to do gold coast this year, looking fwd to it

cheers Dave. Look forward to catching up sometime soon. I'm running (not racing) the WAMC run up at Kings Park this Sunday.