The week hadn't started brilliantly with a few niggles in my legs to the extent that I took Tuesday off. It was still hanging around late in the week but had improved - most significantly after I had a good massage from Nathan at the Running Centre on Thursday. Thanks Nathan!!

Went out for dinner on Friday night with Clown, Epi and Sling Runner (who was down from Singapore for the race). Excellent meal and of course lots of running related chat. When I got home and told Rox what we had eaten (3 courses) including big plate of pasta, she commented that the waitress would have been very confused seeing 4 skinny guys putting away so much food.

I had taken Friday off work to make sure I was mentally rested. Rox and I went to see The Hangover Part II which was a perfect movie for getting your mind off other things. Made me think though that it has been a long time since I got completely trashed - probably last time I carried on after a Christmas party so at least 5 years.

Saturday was a very quiet day. Made up my special drinks and took them out to the WAMC and also picked up Sammie's race packet for the Kid's Marathon. It really is worth watching her finish video (see a couple of posts below). Saturday night was more pasta and I really felt like I was carbo loaded and ready to go.

Race morning - got to Burswood around 6.40am and parking was already well and truly at a premium. Marathon numbers were up and the Dalai Lama was appearing at the the Dome later that morning. Got a park in the far car park which was good as it gave me a nice walk to the WAMC along the last few hundred metres of the course which was useful for a bit of mental preparation and focus.

Went for a 1km warm up jog at around 7am. About 5min pace just to get the legs moving. Visit to the loo - excellent work by the WAMC getting the extra porta loos this year which made it far less stressful. Body glide and race singlet on and it was time to go.

Trailblazer did his normal burst to the front for the first 400-500m - it is expected of him now and he didn't disappoint although I'm sure it has a negative impact on his performance.

Despite Jockster and Big Kev saying while we were waiting for the start that they were going to run the first km @ 4mins and then go to 3:56 after that, the first km was a 3:45. I went with it and although the pace eased a bit, we were about 30-40secs up on 4min average pace by the time we got to 10km. I think Jockster and BK had us slightly quicker than that by their Garmins.

My Garmin was showing slightly short at this stage and for the remainder of the race because it lost the satellite signal under the Windan Bridge and measured a 4.28km which was probably about 130m long.

Coming up to the drink station at the Narrows (approx 11km), Jockster gave Kev the gels he was carrying for him and said that he was going to take his drink and would probably slow a bit. In fact, he sped up before the drink station and then ran on strongly, opening up a gap on me and I thought Kev. It was only a bit of a way down the freeway when we ran past former Australian opener Geoff “Swampy” Marsh out for a walk (he has been in a good paddock) and I turned to comment to Kev about it that I found it was another runner in a blue top who was just behind me and that Kev was about 20-30m back.

The average km split pace on my Garmin was all over the place at times although the actual splits seemed ok. Don’t know whether it was the cloud cover but sometimes it would say I was running 4.10-4.20 when my pace and effort were the same and I was actually running around 4.00 or slightly quicker.

I basically kept a tab on my pace from the km markers and time elapsed at each km and also kept an eye on my current pace. The most I got ahead of 4min average pace was about 37sec. Jockster had run on strongly and would have got out about 300m at the most on me.

Managed to find my drinks very easily and was lucky enough to have my brother Nick hand me my drink at a couple of drink stations. A volunteer also handed me my drink with a gel at the turnaround so that all went very smoothly.

I don’t know whether it was because the number of runners in the race was greater this year but there certainly seemed to be more spectators out this year. I received great support from Rox, Nick and his family (Nick actually tracked me pretty much from 10km onwards and must have seen me about six times including finish), his wife Brigit and their girls, Tammie and Garry, my Mum and Dad, Clown and Dave Bryant. Also Sugar and Kim out near half way were a welcome sight at that point in the race. Heaps of encouragement helped keep me going and I really appreciated the motivation from Nick, Clown and DB over the last 10kms.

Picked up runners steadily from 15km onwards and was in 10th by about 25km. By the time I was running along the Freeway on the way back I could see Jockster about 250m in front of me and steadily worked on making up that ground over the next 5kms. Passed a couple of runners, one near the Causeway and another just before Mends Street.

I got to Jockster just before the Swan River Trust building with about 2kms to go. He sat just back from me and I think had a little bit of a crack as we went under the Causeway but I was able to run on strongly and in fact, from my Garmin it looks like I ran that km in 3:46.

The runner in front of me had stopped with a cramp but he saw me coming and started running again. Although I was gaining on him quickly, I ran out of distance and finished just behind him. 7th overall and 1st M40-44. 1:23 out and 1:26 back. 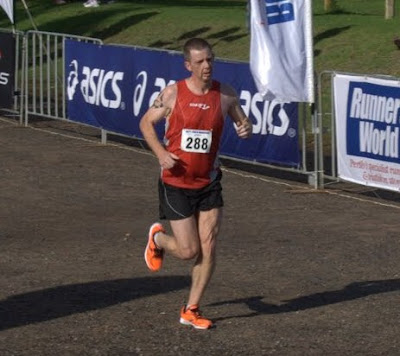 Had a great run – really pleased with how I ran today. Stuck to my pace and although I faded a little over the last few kms I was still able to pass three runners in the last 6km. I am glad I kept faith with the program and the goal I set myself early in the year. I really targeted this race and didn't allow myself to get distracted by my own or other people's performances in lead up races.

By my Garmin my slowest kms were 4:09 at for kms 35 and 41. Was certainly holding a sub 4min/km pace to 32km and only really faded from 35km. So there is a bit of specific endurance to work on there although it really is the hardest part of a marathon to train for as it is really only in the marathon itself that you experience that specific fatigue.

Was completely spent for about 5mins after I finished but then recovered reasonably well. We headed out for dinner around 6pm to Tony Roma's in the city where I enjoyed a nice big juicy steak. Everyone really like their meal so I think we will be back there again.

I had already organised myself a day off work for Monday and Rox and I saw another movie, Super 8 which was excellent and is highly recommended.

Congratulations to Epi on a solid run just outside 3 hours on limited preparation since Boston. Big aerobic base there and I am sure he will be running quick over the coming months.

Bad luck to Sling Runner and also to Gerry Hill who were DNFs due to injury. It is never good going into a marathon with an injury as I found out at Rottnest but at least by pulling out early they have given themselves a chance to recover quickly.

This week I have taken a full three days off and only went for a very gentle 6km this morning (Thursday). I am going to keep it very relaxed over the next couple of weeks and only run when I really feel like it.
Posted by Biscuitman