Despite my best intentions, I have not posted a blog update for a while.

My blister problem is now well and truly behind me although I am now taking extra precautions by taping before speed workouts and long runs.  I don't get blisters everytime I don't tape so in some ways it is a bit of a waste but the prevention is far better than the problem/cure for those occasions when it does happen.

My last four weeks of training have been 100km; 102km; 107km and 89km.  I made a conscious effort to get my mileage up over 100km a week and have been running 7 days a week, up from 6 days.  I now run a very easy recovery run on Sunday and have moved my first speed workout of the week to Monday (from Tuesday).  I have been running some doubles on Tuesday and Friday when I am feeling the desire.

So I think I have built a good aerobic base having got the mileage up and done some good long runs.  I have also done a few good speed workouts building towards a couple last week when I tested my fitness based on some stuff I read in Brad Hudson's Run Faster book.

My key workout last week (Thursday) was  5x 1km with 60 sec recoveries.  This followed from a bit of a progression where over the past month or so I have done 5 x 1k with 2 min recoveries, 3 x 1600m with 2 min recoveries, 5 x 1km with 90 sec recoveries and now this workout.  All have been at around 5km race pace.  Unlike the previous week when for the last three recoveries when I walked for 30 secs and then jogged for 60 secs, for this workout I made myself jog for the full 60 secs – no walking.


I’m really happy with this session. Although the times were going in the wrong direction ie I was getting slower, it was only slight and this is the hardest interval session I have done. I managed to run at my goal 5km race pace which was the aim of the workout. although I was hanging on for the last minute or so of the last 2 reps – it was hard work!!

This was backing up from an 8km tempo run on the Monday where I ran 29.48  which is 3.43/km pace and only 4 secs off my best for this run when I ran a much harder effort.

Other highlights of the last month have been a weekend we spent down at Albany where it was very relaxing, I got in some good running and Ben caught his first fish and the weekend just gone when Sammie got off of her trainer wheels on her bike and rode all the way back from Mends Street.

Went to say goodbye at the end and had a bit of a one on one chat. He gave me a very meaningful analogy about training for racing. It’s like baking bread – you know what all the ingredients are, you put them together in the bowl and put them in the oven. But if you keep opening the oven to take a peak, the end result won’t be as good as it could have been. In other words, don’t keep testing your race fitness in workouts – it will detract from your race performance.  Craig said that he rarely goes over 80% effort in training which I found surprising.

The other really useful thing I took away was that you should reconsider any workout that is going to impact on the next workout you are going to do.  I try to do this anyway but this was good positive reinforcement. 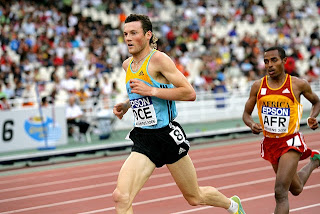 It was good catching up with heaps of other runners at the breakfast and meeting a few people as well.  I had a great chat with Raf's brother Ryan (You can check out his blog here http://beanbaugh.blogspot.com/), and hopefully I can keep in sight next time we race.

While I haven't had a chance to race recently, I have had a chance to watch lots of good racing.  The Commonwealth Games provided some great races, especially the 5000m, 10,000m and marathon but the best race over the last month was undoubtedly the Chicago Marathon.  If you know how it turned out then you don't need me to tell you but if you don't you should definitely watch the video below:


Track and Field Videos on Flotrack


Rottnest 5km is this weekend. Obviously I'm hoping to have a good one and run a PB but most importantly I want to race well. I'm definitely treating this as a race and not a time trial. At a minimum it would be nice to race better than I train which has been a bit of a problem for me recently.

Some good momentum building there, wish I could do 100km weeks and 3.20/3.30 1k intervals. Very short rests too. Agree with the keep moving idea during recovery. Australia has only had a handful of people in the zone that Mottram inhabits, is potentially an Olympic medallist in 2012 I think, although he has to tick a lot of boxes along the way, make it it into the final and get it right there. The move from Bideau to Wardlaw could be very good timing for him.
Agree that sometimes we reduce our race peak, by too much double and triple checking of where we are at with fitness checks, when we'd be better off concentrating on the race peak, and trusting our training.

Thanks for the vid re Wanjirus gutsy and powerful kick for home to nail Chicago in an awesome time in hot conditions. Has to be a big contender to improve Hailes WR.

I had some good chats with a few legends at the Running centre after the breakfast.

The best is yet to come from you, if you can get the consistency and momentum that Clown got this year. way to go!