I am reduced to a week of cross training due to the effects of a nasty big blister on the inside ball my left foot.  It developed during my intervals last Thursday. It was basically a blister under a spot where there had already been one or two blisters and I ended up with a bit of a hole in my foot.

It was a good session not affected by the blister at the time - Session was a specific endurance test for 5km race pace.

I wanted to see where I was at in relation to goal 5km pace/specific endurance/fitness so took this test session from Brad Hudson’s “Run Faster”5 × 1km with 2 min jog recovery between.

Met up with Clown as usual on a Thursday although he was doing a temp run so we only ran together for a couple of kms before doing our own thing.

Not sure if it is supposed to be that hard if that is your intended 5k race pace but I have had a few hard/quicker runs over past 5 days so hopefully that contributes to the feeling that it would be very hard to maintain that for 5km without recovery.

Still pretty pleased with how it went and certainly felt like I worked hard.  Now that my soccer coaching commitments are over, I think I will re-jig my week slightly so that I do speedwork on Monday and Thursday rather than Tuesday and Thursday as I will do an easy run on Sunday morning after Saturday long run. I think the extra day between speed sessions should give some better quality on Thursday.


Blisters are just an occupational hazard and I usually heal up pretty quick (ie within 2 days) so I still did the 30k fast finish long run that Clown and I had planned for Saturday morning.  I think I subconsiously ran on the outside of my foot because it felt like there was some deep bruising afterwards (especially on Sunday morning).  The blister had got worse as well.

We headed out past Burswood up and around Ascot Park, over Garrett Road Bridge, back through Maylands and East Perth, over the Causeway to Coode Street, South Perth and then home.After a stop for a drink and a gel in Maylands, picked up the pace for a fast finish 12km.  Although we intended to run at 4.10/km pace, we settled in at a pace around pr just under 4min/km.  Clown is in great shape and he picked it up even more after 7km which was too quick for me and i dropped off the pace although I pushed on to Coode Street. This run really confirmed that Clown is in great shape for Melbourne in 4 weeks time.

I am keen to keep my long runs at least 2 hours even though I am running shorter stuff for the rest of the year as I am sure they are the key to improvement and strength for me.
I took Sunday and Monday off and it felt quite a bit better when I woke up this morning so I headed out ro a recovery run to give it a test.  Tolerable but the outside of my foot where I was feeling bruising did n't feel too good. I ran 8.6km and after about 5k, I started to feel a hot/burning/pulling on the underside of my foot. I have never had plantar fascitis and thought that was more in the arch but this did not feel good. Slowed right down and have now decided not to race Bibra Lake this weekend but instead have a week on the bike to let everything get back to normal.
Bit of a bummer because Bibra Lake was my only chance to race before Rottnest as we are going away for the weekend of the Fremantle Half.  I have been averaging 85km a week over the past 6 weeks with a couple of decent long runs over the past couple of weeks and felt like everything was heading in the right direction.  Only a minor setback though and I hope to maintain my fitness on the bike.  I'll try to get out on the Freeway bike path and do some 1 min on/1 min off intervals this week and a longer ride early on Sunday.


In good news, Ben's soccer team ended the season as league champions.  We won the last game of the season, whereas the top team somewhat suprisingly lost. Great reward for the boys who really have played well this season and a msssive improvement.  We only lost 3 games and none of them were by more than two goals and the most we conceded in any one game was 3.  It can be a little bit of a drag going to training after work midweek and being enthusiastic and keeping things fresh but when you see the results it makes it worthwhile.
I recently ordered some shoes which turned up yesterday.  I have put a photo below. Good to see that Saucony have toned down the colour of the Fastwitches. I am hoping/planning to transition into the Kinvaras as my general training shoe as I am really appreciating running lighter shoes recently and almost resent having to wear my heavier Asics 2150s and Brooks Adrenalines. 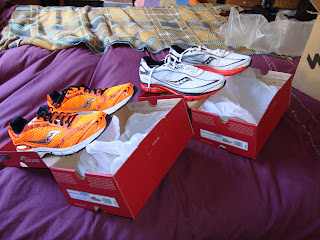