Before, Bali and Beyond 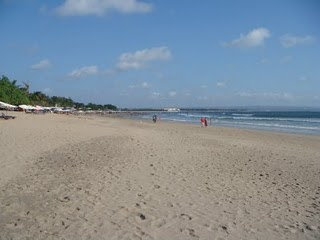 Beach at Legian where I ran every morning
This is a bit of an epic given the length of time since I updated.  Most of this is taken straight from Strands so its old news if you have been following there.

Thursday 29 April - This is approximate time and distance as I forgot that to get the 23.37km run out to UWA and back around the Bridges that I have measured, I need to do a short out and back leg to the Marathon Club when I get back over the Causeway. As a result this is about 2km short of that.
Also had to stop for 2 pit stops so have deducted 5 mins for that.

Definitely felt a bit tired this morning but it is important to keep the kms up this week as next week we are in Bali and it may be hard to get anything longer than an hour a day in. Last time we went to Bali I ran on the beach but that was when I was just running to maintain some fitness for football. I’ll be trying to get in a run on the beach first thing every morning.

We went out to a Mexican restaurant last night for a family dinner to celebrate my birthday. I have had Mexican before running before without a problem but the result this morning was that the first hour of my run was basically a tour of the public toilet facilities between South Perth and Garrett Road. As a result a pretty slow pace due to discomfort and the stop starting.


Sunday 2 May – rest day including travel to Bali

Monday 3 May - All distances are approx for this week based on time and effort (although I have subsequently checked on Map My Run and found that I am pretty much right on).

Wow it is humid here. Even setting out before 7am (no way I am going before 6.30am – I am on holiday after all), the humidity combined with steamy heat is stifling.

It had been belting down with rain about an hour before I headed out for this run so that just added to the humidity.

Our hotel is on the beach so headed down and turned right – further away from Kuta. Had to jump across/run through some drainage channels before I got to one that was simply too wide so turned and ran back. Got back level with hotel in 38 minutes so ran on for 11mins more before turning and running back. Got back in 9.50 for a total of 58.50 (4.31/km)

Drenched in sweat and soaking wet shoes – slipped them off and straight into the hotel pool. No shirt for running this week.

Two of the three pools at the hotel we stayed at
Our hotel/apartment is nice, especially for what we are paying. Have been ripped off once by a money changer – still don’t know how he did it – must be a magician.

Tuesday 4 May – 11.3km in 51 mins. Headed out to the left this time towards Kuta and then on towards the airport. After about 15 mins the beach gets rocky but there is a paved path which I ran on until the end of the path then slipped around a fence and ran on towards the airport. I must have been on airport land though as when I only had about another 100m to go before I could run no further as there was another fence and then the airport runway causeway, I got turned around by a security guard (friendly).

It was sunny this morning and pretty oppressive.

Wednesday 5 May - Did the same run as yesterday but without the trespassing on the airport land. As a result, a slightly shorter run. Was feeling pretty fatigued but made the effort to run back quicker than I ran out – which I achieved 23.10 out and 22.35 back. 10.2km in 45.45.

Straight into the pool again which has become the ritual.

Thursday 6 May – Every run I have done so far has been shorter than the previous one so within the constraints of drains and airports, I wanted to run close to an hour today.

Headed out to the right and ran until I got to the first drain that I couldn’t jump across and then turned and ran back -11 mins back to level with hotel. This worked out well because I needed to make a pit stop.
Already drenched in sweat, headed out to the left and did yesterdays run in even splits 23.03 and 23.07 for a total of just over 57 mins (12.5km in 57.10).

Pretty solid running. I won’t be doing any speedwork this week I think. Just steady running to keep up some aerobic base.

In the afternoon, was going to get a massage at the hotel by the pool but the going rate was twice what was being charged outside hotel.


Was going to find a local massage place but ended up going with the first offer of a massage that was at the rate I was going to pay (60,000 rupiah for 60 min massage). Seemed like a pretty good massage by three women – pretty firm. Only 50 mins and knocked back two offers of “special massage” so even though it was was OK quality, if I have another one while I am here, I think I will go to the spa I found a bit further along the road which was same rate but without the pressure for extras.

Ended up tipping the two friends 5,000 rupiah each but still less than $10 all up.

.
Friday 7 May - Slow run out to the airport and back. 10.2km in 50.10. Had a bit of a sore neck and woke up stiff. Don’t think it was a particularly skilful massage I got. I’ll stick to trained professionals in the future I think.

Had to take a pit stop at a toilet block on Kuta beach on return leg – an interesting cultural experience – it was basically a plumbed hole in the ground.

Sunday 9 May - rest day for travel back to Australia.

Only 67.4km  for the week but it felt like more - certainly timewise it was longer than a normal 67.4km would take.   I read the other day that your your muscles, tendons, ligaments, heart, and lungs don’t understand” how far you’re running. However, your body does comprehend and react to an effort level over a specified time so this week was still very beneficial in that respect..

Monday 10 May -  Back to my regular Bridges loop for my first run back home. Had a rest day yesterday with the travel home. Felt a little tight in the achilles – probably from having run on the beach for a week.

Tuesday 11 May - Medium long run including 5 × 4min hard/2min easy after 35 mins warm up (warm up at a steady pace to actually warm up – it was cold this morning – beanie weather).

Last rep and run home were into a pretty stiff easterly breeze.

Wore the Brooks Green Silence again – taped and vaseline in the blister spots but still got one on the right foot. Maybe I put the tape in the wrong spot. I’ll give them one more chance before retiring them to be after race shoes. I’m not sure they have enough support to be a marathon shoe for me yet either.

Thursday 13 May - Ran with Simon on a cold and rainy morning. Had been quite stormy during the night but eased a bit by the time I headed out at 6am. Still light drizzle but got wetter splashing through unseen puddles in the dark. Met Simon down near the Causeway and then we ran past Burswood, over the Windan Bridge, out to the Peninsula Golf Course, then back and through East Perth, City side of river, Narrows and back through South Perth. May My Run gives me 25.1 in  1.45 (4.10/km) so we were going along at a pretty fair pace.

One pit stop – still some residual Bali issues there I think.

Great to hear Simon’s Boston stories – I think he has one of the best I have heard – leaning on 1988 Olympic and 1990 Boston Marathon winner (plus 2 x European Marathon Champion) Gelindo Bordin to do a quad stretch in the coral at the start!!

Friday 14 May - Recovery run. Thought that I would be tired after yesterday’s solid effort but had a surprising amount of “pop” in my legs. Ran easy but stayed off of the wet grass and went a bit quicker than normal on this run. I needed to though to keep warm – I don’t know what the temperature was this morning but it was cold. Wore long sleeves, Skins and beanie but was still wishing I had worn gloves too. 8.6km in 39.17 (4.34/km).

Saturday 15 May - Long slow run – wasn’t too bothered with pace especially after Thursday’s solid effort over 25km. Just wanted to get some time on my feet. I read something the other day along the lines that your body doesn’t know how far you have run just how long you have been running – so that was the aim for today.

This is the 2nd 20 mile run of this marathon training segment – I have two or three more with one or two of them getting out toward 35km.

We had a picnic in Kings Park for lunch and then went to the Running Centre in West Perth to spend the $50 voucher I got for my birthday (I intended to buy a Sugoi jacket now that the rain is coming in but they didn't have my size - so they are ordering it in for me). Ended up buying (much to Rox's frustration) a pair of Saucony Fastwitchs. Seem very similar to my Ohana racers. I think I will play it safe and wear the Ohanas on Sunday and hopefully the Fastwitch will be my GC Marathon shoes.

Great store - unlucky for me that I had Rox with me but luck for the wallet/budget I think.

Sunday 16 May - Easy ride with Neil on a Sunday afternoon. We just rode down the bike path south alongside the Freeway and then turned and rode back the same way.

Stopped for a coffee after 46k and then went our separate ways.

Monday 17 May - Bridges loop – picked it up a bit towards the end but not too much – pretty easy throughout.

Wore Brooks Green Silence – taped in the right spots this time. No blisters but am pretty convinced that this is not a shoe I should race more than 5-10km in. There is just not enough cushioning or support for a Clydesdale like me.  12.8km in 55.45 (4.21/km).

Couple more relatively big days this week (18.5km tomorrow and 24-25km on Wednesday) and then pretty easy for the remainder of the week before the Run for a Reason on Sunday.
Posted by Biscuitman