Got there early to help set up. Sugar and Kim were race directors for this one and they kindly let me run as well as meet my volunteer/helper obligations.

Finished setup in time to register and then do a 2km warm up followed by some drills and a few strides. There was a good turnout for this race – over 200 I reckon and some quality runners, especially in the 16km where Ethan Heywood who will be representing Australia in the Junior World Cross Country in a few weeks was running.

There was a monster easterly wind blowing, but luckily for me they went out fairly conservatively (well, very conservatively for a few of them) and I was able to tack onto the back of the group and this certainly helped with such a strong headwind. I managed to stick with them until just after the 2km mark when an incident with one of the runners just in front of me clipping a pedestrian walking in the other direction caused me to lose contact and concentration. 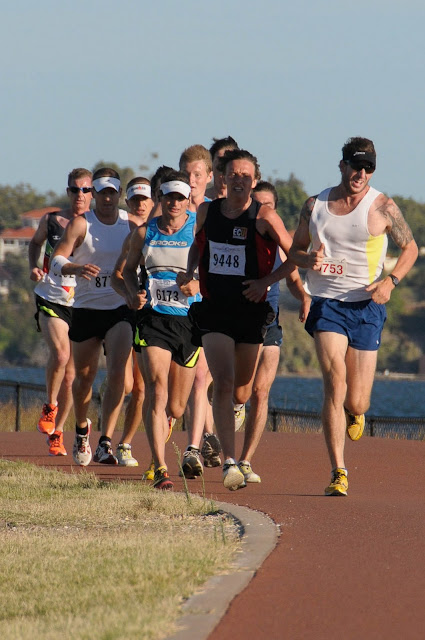 (Photo taken by whippet - just look for the Orange Saucony Fastwitches at the back of the pack)﻿
I turned at 2.5km in 4th spot with the guys in front of me then putting the hammer down with the wind no longer a factor but I had a decent enough lead over 5th. I was on track to run a PB though and wanted to push through. Things got hard especially as I was now running by myself in almost a time trial situation but I just told myself to give it another minute, then another minute and pretty soon I hit the 1km to go mark. I hadn’t looked at my watch at all apart from at the first km split so just pushed on as best I could. I did get a bit messy in the last km as my form fell apart a bit but by the time I turned a corner and could see the clock at 17:26, I knew that sub 18 and a new PB was in the bag. I wish now that I had sprinted the last bit to get under 17:40 but when I finished I was absolutely spent so there wasn’t much left in the tank, if anything.

Went for a cool down of 4km which was interrupted by a nasty cycling accident when a young guy of about 18-19 stacked his mountain bike at high speed as he turned off of the path just in front of me. He was badly winded and had a bit of road rash and a bit of claret flowing. A lady and I stayed with him for about 10 minutes until he was feeling a bit better as he was in a bit of shock and could hardly talk and then she offered to accompany him home. He wasn’t wearing a helmet and it could have been a lot worse than it was.

I’m really pleased with this race. I don’t think anyone could say that these were PB friendly conditions so to finally get a time close to what I thought I should be running feels great. I was starting to think that maybe I wouldn’t be able to run any quicker than I was before I got injured in 2009 but now I feel like I am perfectly set up to really nail my marathon preparation as I am well ahead of where I was this time last year in regard to both base mileage and now speed.

Thanks to Sugar and Kim for putting on a great race and to Clown, Whippet and Simon C for the encouragement today.

Next PB to fall - HM at Darlington

hopefully it will be on the old course!!

Congratulations! hopefully the first of many this year. Reckon you are due!!!