Back to civilisation after a massive weekend

Telstra managed to knock out cable service to part of Kensington on Friday evening and despite a few phone calls to a some very polite Indians, service could not be restored until Monday.  So no internet or Foxtel for the whole weekend - it was like being on the Survivor island - talk about cruel and unusual punishments.  Luckily, we got reconnected on Monday in time for the Boston Marathon that night.

Our terrestial ABC reception is crap so it spoilt the first episode of the new Dr Who series a little.  I read in today's paper that there has been a bit of bleating about the tweaking of the theme music - some people just can't handle change.  I'll reserve my judgement on the new Dr for a few episodes but I like the new music and the new logo.

On Saturday morning I went for a solo long run.  I decided to run the last 12.45km @ marathon pace/marathon pace effort.  The first 14+ kms were a little boring.  I have done this run so many times and was just chugging along waiting to get to the business end.  Also missed having the company for both a chat and maintenance of some pace and focus.

I did the Burswood/Ascot/Garrett Road/Maylands loop. I have measured this on Map My Run previously and although there is a small change with the new bike path in South Perth, I don’t think it has altered the difference at all.

Really surprised and encouraged to have run 50mins for the last 12.45km. Even if the distance is slightly off, I can compare to previous efforts in previous training cycles and that tells me it was one of my best training runs.  All up 26.6km in 1 hour 58 mins but with the last 12.45km in 49.59 (4.00/km pace).

On Saturday afternoon, we rode our bikes down to the river to watch the qualifying of the Red Bull Air Race.  I quite like the Air Race.  I know it is essentially a marketing exercise for Red Bull rather than a sport but it is competitive and pretty spectacular up close - even when they don't crash into the river.  I've been following Nigel Lamb ever since the first race here in Perth and think that he was very unlucky not to win it this year.  He was close though which hopefully carries through for the rest of the season.

On Saturday evening, we arranged babysitting and Rox and I went out to the Athletics Stadium for the evening session of the National Championships.  We forked out the extra for seats in the stand and got some right in front of the pole vault pit where the women's pole vault was on. We also got some expert commentary with World and Olympic Champion, Steve Hooker, sitting in the row directly in front of us. 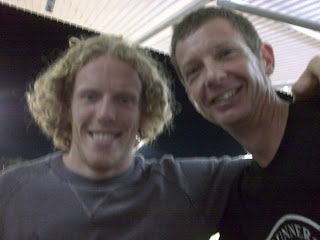 Me with Steve Hooker
The women's pole vault was a good competition and pretty exciting.  Very engaging having training partners of the competitors sitting so close and riding every vault.

For me though. the highlights of the evening were the 5000m and 400m finals.  The 400m final had Ben Offereins, Sean Wroe, John Steffenson and Joel Milburn all trying to get one of the three spots for the Commonwealth Games.  I think everyone had Ben Offereins down as a definite given his form but it was a raffle for the other two spots.  As it turned out, Sean Wroe missed out but what an awesome relay squad.

The 5000m also promised to be a great race with Collis Birmingham, Ben St Lawrence and David McNeill as well as the race within a race between the WA pair of Courtney Carter and Roberto Busi.  Courtney beat Roberto quite comfortably at the State Championships a few weeks back and I think most people, me included, had him down as favourite to be the first WA runner again.

Started off as a very tactical race and they really were dawdling along (relatively speaking - it was still way quicker than my pace) but slowly Collis Birmingham stated to wind it up and with about 1200m to go he and Ben St Lawrence had dropped the field, including David McNeill (a little surprisingly for me) with Birmingham then establishing what looked like a winning break over St Lawrence.  Then with about 280-250m to go (and we had a great spot to see it looking across to the back straight) - Birmingham's stride started to noticeably shorten, I guess as lactic acid started to kick in.  St Lawrence noticed too and wound him in and passed him in the straight to win.  McNeill third.  Jeff Hunt ran fourth - he looked strong but understandably lacked a bit of pace given his recent marathon efforts.  Roberto eighth in 14.21 and Courtney 9th in 14.29.  A bit of surprise but well deserved by Roberto.  He races regularly in Perth despite rarely getting much competition so it was nice to see him get the reward for his hard work.  I expect Courtney may be a bit disappointed as I think he was hoping to set a good PB.  Perhaps the way the race turned out worked against that - the pace was so slow early and then it would have been suicidal to try and cover Birmingham when he cranked it up.

The night finished with the Mens and Womens 100m finals - great to see Patrick Johnson still out there and running really well.  He finished second.

On Sunday morning, we had the first games of the soccer season for Ben and Sammie.  Ben's game was at home while Sammie's was out at Forrestfield.  Apparently, it was a complete debacle organisation wise out at Forrestfield for the small sided games but Sammie got a couple of games in and seems happy enough.  Rox said she got a couple of kicks and I'm sure she will catch on soon.

We won 4-2 against East Fremantle.  I think this is the first time in the four seasons that Ben has played that we have won our first game.  We were 2-1 down (after leading 1-0) so it was really encouraging that we fought back.  Defence was solid, Ben had a good game and we actually seemed fitter than the other team.  All good signs for a successful season hopefully.

Sunday afternoon - back to the track for the last session of the Nationals.  We just sat on the grass banks this time, which wasn't so great for the sprints or the pole vault, but ok for high jump and the middle distance events.  Womens 800 and Mens 1500 were both good races with excellent finishes in both.  Marc See threw it all on the line in the 1500m and got some great crowd support.  Steve Hooker didn't have a great time of it in the pole vault but 5.80 is still a good jump.  Performance of the day was Fabrice Lapierre in the long jump - 8.78 (wind assisted but still awesome).  Sugar took some photos - the one of Lapierre is one of the best of them


Monday - I ran what was quite literally, a blistering tempo run.  Ran the Maylands 8km tempo course this morning. Wore new Brooks Green Silence racing flats for their first outing as I would like to wear them in the HBF Run for a Reason but hadn’t even worn them yet.

Really comfortable but can definitely notice the lower profile/lower rise to the heel over the Asics Ohana Racers. Managed to get blisters on both feet, (right worse than left), between the big toe and the ball of my foot. I think the friction point was when I was driving off when running quicker as I felt the right one starting to come on about 2.5km into my tempo run.

The aim for this run was to do the 8km @ half marathon pace which for me at the moment, I estimated at 4.00/km pace. I had a feeling I was going to have a good run and go slightly quicker after my really good long run on Saturday and also quite inspired/motivated after watching the Nationals over the weekend.

This was easily the quickest that I have done this 8km tempo run (I think quickest previously was 32.11 at end of February).

So I think I can say that I have made some progress over the past three and a half months.

Monday night - Rox and I settled in to watch the Boston Marathon.  Woeful coverage on ESPN.  Commentators were wallies of the first degree and they had the knack of going to an ad break everytime there was a development in the race.  Far too much too much time spent on what was a pretty boring women's race until the last 3-4 miles and completely missed the surging and breaking up of the pack in the men's race.

The Athlete Alert emails didn't work.  The only ones I got were two splits for a guy called Roberto Mendoza who was wearing my number from last year (He ran slower than me).  Luckily we could still track via the BAA website.

Congratulations to Simon E (2.56), Clown (3.02 - 5 min PB) and Epi (3.01).  I'll let them tell their own stories but I have exchanged some texts with Simon and Clown and it seems like there are some good ones to tell.  Seems all three of them faded a bit after 20km although Epi was still on for sub 3 hours until the last 5km it seemed.  Well done guys!!

Bit of a late night waiting for the splits to come through and it was nearly 1.30am by the time I hit the sack.

Tuesday - Up at 6am for a 16.2k general aerobic run.  Just did the Maylands out and back.
A little fatigued after yesterday’s hard effort and then only 4.5 hours sleep.

Beautiful morning for running – had some fog in a few places (although there was also some smog over the city which was not so nice). No wind and just great to be out there with lots of thoughts of Boston in my head.

(Wore my HRM – only because my usual watch was in the bottom of my bag somewhere. Average HR 148).

Recovery run tomorrow after a good night's sleep.  I'll be calling it a night straight after Survivor.
Posted by Biscuitman

Cool photo with you and Steve H.

Thanks for the best wishes and support, will catch up for a run when i get back.

Nice write up of the Nationals, wish I'd gone down there.

That pic with Steve Hooker is sensational. :-) Nice work. Not everyday you get your photo taken with a world champion. I reckon if you went to New York maybe you can try for one with Ryan Hall or even better Gebrasslissie (sp) Tergat or someone...

From the long run and especially the 8km it sounds like you have leaped up to a higher level. way to go! Keep going in that direction and some major breakthrough results heading your way.
Lookout anyone who is used to being ahead of you.

Enjoyed the writeup of the nationals, so disappointed I couldnt get there, the pics from Sugar are awesome though!

Seen the first 3 eps of DW, and like the titles & music ; definitely go for the sidekick, and I reckon Matt Smith does pretty well, definitely more whimsical. David Tennant was always going to be a hard act to follow, but had gotten a little dour. One thing I don't like about 'cult' SF (DW, Trek, most superheroes) is the hardcore audience that goes bonkers if they change *anything*!