The problem with waiting to post your own report of a camp that other bloggers went on is that everyone has said the things you would like to say.  I was too tired on Sunday (and probably poor form to come home to the family from a running camp and then spend too much time on the computer writing about that running camp).

Yesterday (Monday) the power was out until 9pm due to the storm and when it did come back we had no internet.  We got off lightly though having seen some of the photos going around and I see that unfortunately there was quite a bit of damage at The Running Centre.


I had an absolutely fantastic time at the camp and am so glad that I went.
Training update from last Thursday onwards though before I get on to the camp:
Thursday  - Easy run to Maylands and back with Clown. Very pleasant morning for running and we kept it at a conversational pace and had a good chat as we went along.  16.2km in 1hr 14 mins (4.34/km).
Friday AM - Slow easy recovery run. There was a recovery run scheduled for wen we got down to Dwellingup so this was just a shake out to wake up the legs and because I feel really off for the day if I don't run in the morning.  6.4km in 35 mins (5.28/km).
Friday PM - Clown gave me a lift down to the camp.  Great to have a long chat on the way down - mostly about running of course but also touching on other vital matters such as cricket and football.  We may have discussed work, families and that sort of stuff as well ... 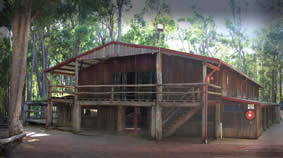 I had never been to the Nanga Bush Camp before and it is pretty impressive.  We were staying in the Woodshed which apparently is the original (first) bunkhouse at the site.  It was pretty basic with a large open area downstairs including tables and the kitchen and bathrooms and upstairs was 4 berth "cabins" each consisting of two wooden bunk beds.  The numbers worked out that apart from couples, we got a berth each which provided plenty of space for bags and other gear. 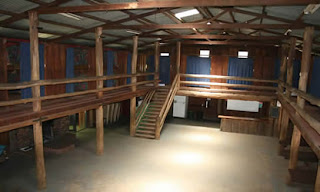 Around 6pm we headed out for a recovery pace run.  We were a fairly big group and it was pretty hilly.  We also took a wrong turn which probably added a km or so to what we planned on doing.  The mozzies were out and although I didn't get bitten I think I swallowed a few.  Quite a few people had Garmins so there was always someone who could give you a measurement of the run we had just completed which was pretty handy.  8.7km in 46 mins (5.22/km) but included a stop where we tried to work out which way we should be going.  We got back just as it was starting to get pretty dark.
Friday evening after dinner (pasta of course), we had a talk from Steve Skivinis who is a dietician.  It was a bit of an eye opener.  Steve has some pretty strong views on diet and nutrition and a unique manner of getting his point across.  He certainly had everyone's attention and got us all engaged in what could have been a pretty dry subject.  I  have takn a bit from it and if I had the luxury of being a full time athlete, I think I would be right into it but I think one of the things about being a recreational (although competitive) runner is the need for balance in your life.  My family puts up with a fair bit to do with my running and I don't think it would be fair to impose some fairly restrictive diet requirements on them as well.  I'll certainly make some modifications to my diet even though I eat pretty healthily already but I'm not sure I'll go as far as cutting out our access to Thai and Mexican food - that would just be ridiculous!
Saturday AM - we did the famous Mona fartlek session consisting of 2 x 90 secs hard/4x60 secs hard/4 x 30secs hard/ 4 x 15secs hard with equal recovery/float after each rep.   We did a 4.15km warm up and then got into it.
I ended up having to slow my recoveries to proper recoveries rather than floats in order to continue hitting the reps hard. We were running the session on a 1.2km (approx 800m gravel/400m grass) circuit and quite a few guys had Garmins so I was able to calculate that I covered around 5.2km in the 20 mins (3.50/km pace). Mona and Raf really did float the recoveries. Mona almost lapped me - another 15secs and I was gone so he would have covered 6.4km in the 20 mins with Raf doing about 6.3km. Gentle 3.75km warm down afterwards.
Seeing Mona cruise around while doing the same workout (although I was concentrating on my own workout and footing most of the time) highlighted the difference between elite and non elite runners even more than it does on tv or in an actual race (where you only see the lead runniers fleetingly at best).  He covered the 6.4km at an average 3.07/km pace which is pretty good but when you realise that when he ran the then world half marathon record (60.06) in an average 2.50/km pace (which was around the pace of his hard reps in this workout) it's just another world.
Nearly everyone who is serious about improving their running by doing some speedwork has done a Mona fartlek session.  Interestingly, Mona says that it is just another workout and there is no super or secret workout other than 2 x 7 x 52 x 10 (twice a day, seven days a week, 52 weeks a year for ten years).  He was running 200km a week of which he estimated only 19km a week was speed/quality.  The rest of his mileage was volume.
We went in to Dwellingup and had coffee and some food before heading back to the camp. We then had a really informative session on core and running specific exercises from Raf and Justin Barich.  I initially struggled with one of the exercises but when I had worked out which muscles to engage, I actually found that my glutes etc aren't too bad.  Now if only I could get that six pack out of the back of the fridge.
Saturday PM -  A few people headed off for a ride with Raf so it was a smaller group that went on this recovery run.  We headed down over the bridge across the river and up into a track along the river through some pine forest. The sun was setting and it was just really nice. I had a good chat with Mona as we were running - it doesn't get much better than this. We just ran out for 15 mins and then headed back - 6.4km in 30 mins (4.41/km).  A few us us then went straight down to the river and had a bit of a soak of our legs.  The water was cool without being freezing cold  - nothing like Falls Creek according to Mona.

That evening, Mona spoke to us about his career etc including his views on potential vs talent.  He offered to look at any training programs that we might have and I took him up on the offer later in the evening.  I have to say that was another highlight in a weekend of highlights for me - having Steve Moneghetti go through your marathon training program day by day. week by week asking questions about why this and why that.  Only a couple of minor tweaks was good too - makes me think I sort of know what I am doing (with a bit of guidance).

Mona is pacing the sub 3hr group at the Gold Coast Marathon so I will see him again there.  He said he is planning to go through the half at 2.57 pace so that should suit me as I am aiming for a strong sub 2.55 finish at this stage.
Sunday AM - This was a pretty hard and hilly long run - first 4km all up hill and then lots of hills, some of them really challenging once we hit the tracks. Eventually we got onto a bit of a wider road/forestry trail and were getting along a bit quicker for a while. I felt pretty strong on this run and it was just the right length given the effort. The run was into Dwellingup and back.

The group spread out a bit on the way back and I finished with Clown, Epi, Raf and Mona.  Mona went off for a few more kms and a few of us finished up with a good soak in the river - the third for me in two days.

I hope the response to the camp was encouragement to Raf to do something similar again (I got the impresion it was).  He really is a passionate and outgoing guy who seems to genuinely want to provide runners with opportunities to learn and improve.  He has some great ideas and I'll be backing him all the way. 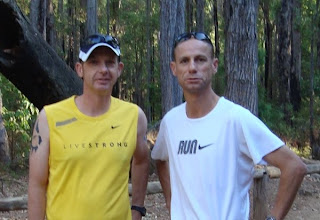 With Mona before the long run on Sunday 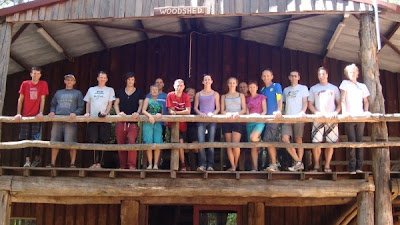 Camp group (minus a few) before heading home.
Nice to be home although I was sad to see the camp come to an end.  We all went to see Alice in Wonderland in 3D in the afternoon - very much the Tim Burton style.  Ben surprised me yet again picking the voices of actors within a few words - eg Alan Rickman, Christopher Lee.
Monday - easy recovery run.  I was a bit stiff in the legs for the first 20 mins but loosened up fine.  It actually felt a bit funny running on my own after 4 consecutive runs with a group.  8.6km in 45.50.
Obviously a very interesting bus ride home on Monday evening right in the middle of the storm.  Water coming in under door of the bus and rubbish bins floating down Canning Highway.  Our power was out for 4 hours but no other problems.
Tuesday (today) - Easy bridges loop. Met Simon Elliott down at the Causeway and got the run down on his half marathon at Bendigo on the weekend (78mins/5th/1st age group) and I gave him the rundown on the Mona Camp. Pretty windy this morning (especially running back on the South Perth side) but surprisingly little damage/debris evident from last night's storm.  This was the first time Simon and I have run together since before the Rottnest Marathon due to my injury.  It was good to run together again and although we crack along a bit we always have pleanty to talk about.  Simon did have very squeeky shoes this morning.  12.8km in 57 mins.
Pretty much all easy running for the rest of the week.  A very short speed session on Thursday before the Bridges on Sunday.  I hope conditions are good as I really want to run hard and fast.
Posted by Biscuitman

excellent to read a very detailed description of the weekend, and see some more pictures of the woodshed, Monaghetti and most of us again. I think I learnt a few more things just reading your post. Thats awesome that Mona is pacing the GC! Way to go!